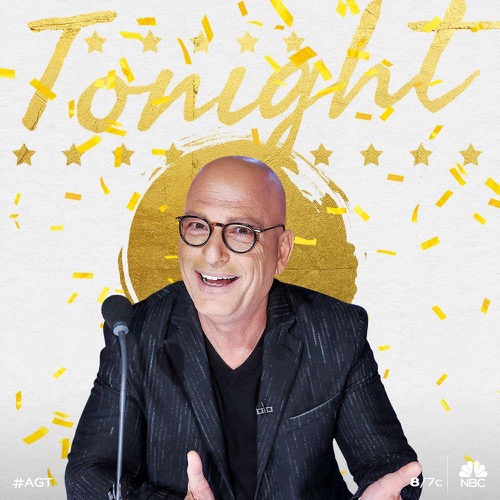 The first act up tonight is Twisty Troy who took the stage with his contortion act. At times, his act was really creepy and freaking out the judges and audience. Simon called his act the “Exorcist.” , Simon loved it, said that he turned into an animal. Howie would like to see him star in a horror film. Mel B thought it was different, he was great. Heidi loved it and thought it was disturbing. He gets four yes votes, he is going through to the next round.

Vivien Vajda does jump rope, but nothing like you can imagine. Vivien jumps, back lifts, twirls all while jump roping. Heidi and Mel B were talking about double dutch, this is like double dutch on steroids. Mel B thought it was brilliant, she loves the tricks and found they were so complicated. Heidi found it so interesting and thinks she is so talented, would love to see her try it with fire. Simon says that this is why he loves this show, this was the definition of variety. Howie says he agrees with everyone. Vivien reveals she was bullied and Howie says she just showed them that she is incredible. Four yes votes from the judges.

Joseph O’Brien is from a small town, he is single and never been on a legit date; he says the right opportunity never came up and he has never kissed a girl. Joseph is really nervous, he sits at his keyboard and sings, “Hello” by Lionel Ritchie. Simon loved it. Mel B thinks there is so much potential on how he can go with his vocals and has so much potential. Howie thinks he can go far. Heidi thinks he is angelic and fabulous. Joseph gets four yes votes from the judges.

Christie Joy sings and it is a pretty quick four buzzers when the judges reject and give her for no votes.
Jim Hall is a world record holder for eating the rawest hotdogs at the same time, another four buzzers for this act.

Raphael Xavier, who has many names after the two, is from Wyoming with a fake French accent. He is playing accordion, but he is actually a comedy act. Simon, Heidi and Mell B all give him an buzzer. Howie seems entertained, he is laughing. Howie thinks it was really funny and he was unique. Mel B is taking her X back, she loved it, she thinks he is way funnier in the moment. Heidi also wants to take her X back, she thinks he was funny and goofy. Simon is not taking his X back, but Raphael is going through anyway.

Raphael Xavier, who has many names after the two, is from Wyoming with a fake French accent. He is playing an accordian, but he is actually a comedy act. Simon, Heidi and Mell B all give him an buzzer. Howie seems entertained, he is laughing. Howie thinks it was really funny and he was unique. Mel B is taking her X back, she loved it, she thinks he is way funnier in the moment. Heidi also wants to take her X back, she thinks he was funny and goofy. Simon is not taking his X back, but Raphael is going through anyway.

Glennis Grace sings a Whitney Houston‘s ballad called “Run to You,” and she was amazing. Not Whitney Houston, but a good rendition. Simon thought she looked amazing and calls her a star already. Heidi thought it was incredible and she sounded so much like Whitney Houston. Mel B says she is hands down an amazing singer and next time wants to hear more of her. Howie says he loved and gives her the first yes. The rest of the judges all give her a yes, she is going to the next round.

Kenny Thomas is from Paris and asked Howie to come to the stage as his assistant in his act. With a helmet on, Howie is laying flat out on the stage with Kenny revved up on a motor bike and hopping around him. Kenny then does a flip on the bike and then lands just near Howie on one wheel. Simon jokes that they are going to have to do it again. Howie says it was amazing and he was an idiot. Mel B loves that Kenny was a daredevil. Heidi loved it and Simon says that after that he is happy that Howie still has balls. All four judges gave yes votes.

Dr. Steven Eisenberg is there to spread his message of love about his patients. He is going to sing an original song about the women he loves, his mother. This doctor can’t sing, Mel B gives the first X, then Heidi and Simon, followed by Howie. Mel B says it is great what he does for his patients, but he can’t sing. His mother comes on stage and defends him, that the song was not about his voice, it is about his heart. All four judges give no votes even though Dr. Steven’s mother tries to no avail to tell them that her son is talented.

Next is comedian Brian Kellan and he is doing comedy. Simon gives the first X and calls it painful. Howie says he was rejected thousands of times and if this makes him better, then he will be successful.

Rob Lake is from Oklahoma and he is an illusionist. He says that he dropped out of college for this career and has planned this his whole life. He takes people from the audience to help him with his routine, along with Heidi and Tara. To make his act more believable, he leaves the theater. There is a platform in the middle of the stage, Heidi and Tara are asked to go on top, they do. Another person goes on back to watch, and another from down below. His assistant brings a curtain for Tara and Heidi to bring up and shake, there is Rob. Mel B loved it, it was magic. Simon says he has magic powers and a great audition. Howie says that not everyone can do what he did. Rob gets four yes votes from the judges.

Violinist Brian King Joseph has a nerve disease that kills his nerved i his hands and feet, then the rest of his body. He can’t feel his hands but he plays from memory. The audience and the judges are going crazy, Heidi goes on stage and gives him a big hug. Heidi says she felt his music and is so happy that he came on the show. Mel B says that he lit the whole stage up and he is amazing. Simon says he has an incredible energy and fantastic energy, his favorite audition to date. Howie says that he is a lesson to how people should be living their lives. Four yes votes get Brian to the next round.

Andy Huggins is from Houston, Texas and his big dream is to do standup on national TV. He is probably, if I were to guess, over 70 and he makes fun of his sex life. Heidi thought he was funny and adorable. Simon says he was very naughty and funny, someone that they are going to remember. Mel B was confused with some of the jokes. Howie remembers him, he says that Andy was 28 years old and welcomes him to show business. Mel B gives a no, everyone else gives a yes, Howie says Andy is like fine wine and he is proud to give him his third yes.

The last act tonight is singer Brody Ray, he is singing Jordan Smith’s “Stand in the Light,” because of the struggles he has faced, he was born female and is transgender. He has tried to fit in his whole life and has had a hard time. The one thing that got him through was his music and his singing. Howie loves his story, thinks he is a great singer and sings with his heart. Mel B thinks his soul comes out when he sings and she likes him a lot. Heidi thinks he is incredible and thinks he is going to go very far. Simon thinks he has an amazing voice and its important to sing his own material. All four judges give yes votes.