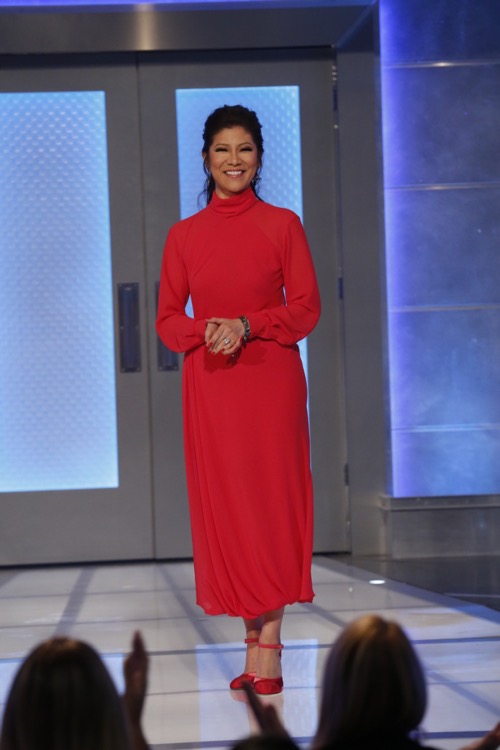 Tonight on CBS Celebrity Big Brother US premieres with an all-new Wednesday, February 8, 2018, episode and we have your Celebrity Big Brother US recap below! On tonights CBBUS premiere episode as per the CBS synopsis, “The 11 celebrity houseguests will find out more about the new twist “recast” and the new HoH will nominate two houseguests for eviction.”

Ross is nervous about the twist, Brandi thinks one of them might get a unitard. Everyone is afraid of the gift bag that James is excited. The girls just hope the twist is going to help them send one of the guys home.

Ross is going on again about the twist and is worried now he has to suck up to everyone because he doesn’t know who is going to get HoH. Mark tells Ross that Shannon is one to look out for.

Omarosa reminds the girls that they have to stand together against the guys and James has figured it out. Everyone is called to the living room to find out how the gift bag twist can shake up the house. Some of the gift bags contain the latest Big Brother Swag, while some contain the power to recast the HoH. Prior to each nomination ceremony, the celebrity gift bag logo will appear on the screen in the living room. After it appears, the first houseguest to go into the diary room and declare that they want to open their gift bag will get to open it and reveal what is inside at the next nomination ceremony.

To be clear, you won’t find out what is in your gift bag until the nomination ceremony. If your gift bag contains the power to recast the HoH, you will immediately take over the role of HoH and make your nominations on the spot. The outgoing HoH cannot be put up for elimination. The power to recast can only be used once after it is used the gift bag twist is over. Not everyone is excited about the twist and the girls especially feel like they have to come up with a plan.

Meanwhile, the men are working on a plan, James thinks they should approach Shannon. James comes up with a name for his alliance with Chuck, the celebrators.

Mark is with Shannon, he tried to talk game with her. She asks him what are his biggest threats in the game, he says James and her. Shannon is shocked that he said she is a threat and feels it was a dumb move on his part. Shannon thinks bringing Ross in with the girls would be a good move, she shares with him about what Mark said. Ross thinks it would be a great move to align with the girls.

James, Chuck, and Meta are in the gym talking about Shannon. Chuck goes to visit the girls in the HoH room for a facial and press on nails. The guys are alone, minus Ross and they agree all this girly stuff needs to stop.

All of them are in agreement that one of the guys have to use their bag, Omarosa is with Shannon and tells her that if they pair up she will be very loyal. Keshia joins the girls and they start talking about the White House and Omarosa’s experience. Omarosa compares her relationship with Trump to Keshia’s relationship with Bill Cosby. Shannon is alone with Chuck, she asks if he is working with anyone and he says no. James goes into the HoH room to kiss Shannon’s butt in hopes of not being put on the block. He comes right out and asks her who she is putting on the block. Shannon asks James the same question, who is the biggest threat and he says her.

Shannon knows that she has to get James out of the house in order to protect herself. Metta World Peace goes to see Shannon and asks her to nominate him because he misses his wife and wants to go home. In return, Metta says that he won’t open his gift bag. Meanwhile, Shannon has no intention of sending him home.

Omarosa thinks that the Big Brother makes you look at your life because nobody in your circle is there with you. Ross is picking Omarosa’s brain and asking her questions about her experience in the White House, she tells him that she is upset with Keisha thinking that she was a part of what happened in Washington. Ross is worried that Omarosa is playing him and not being real. Ross keeps trying to dig, but Omarosa won’t give any more info, she just says that it’s no her circus anymore. Ross asks if she would ever vote for Trump again and she says, God, no.

The women and Ross talk about the plan, put Mark up as a pawn, Metta up as a willing nominee and backdoor James. Shannon goes to speak to Mark, says that she will have his back, but he can’t open the gift bag. Keshia thinks they should have a backup plan in case somebody opens a gift bag. The gift bag goes on the screen in the living room. Chuck goes for the gift bag, Brandi goes in next, then Keshia and Omarosa, followed by Ross and Arianda. Marissa also goes in but fakes it and doesn’t ask to open her gift bag.

Shannon confronts Chuck and tells him that he wasn’t the target and doesn’t understand why he wanted to open the gift bag. Everyone is called to the living room. Everyone who wanted to open their gift bags got to select a colored chip. Shannon is now going to draw a random colored chip and if they have that color, their bag will be opened at the nomination ceremony. Shannon chooses orange.

Time for the nominations ceremony. First, the person with the orange chip will open their gift bag and it is Keisha. She gets the RECAST power. Shannon is no longer HoH, Keisha takes over. She nominates James and Chuck. Keshia made a big move, Shannon didn’t look happy about it but is happy there is no blood on her hands. James doesn’t think he should be on the block and has declared war. Metta also declares war because he wants to go home and they didn’t nominate him.