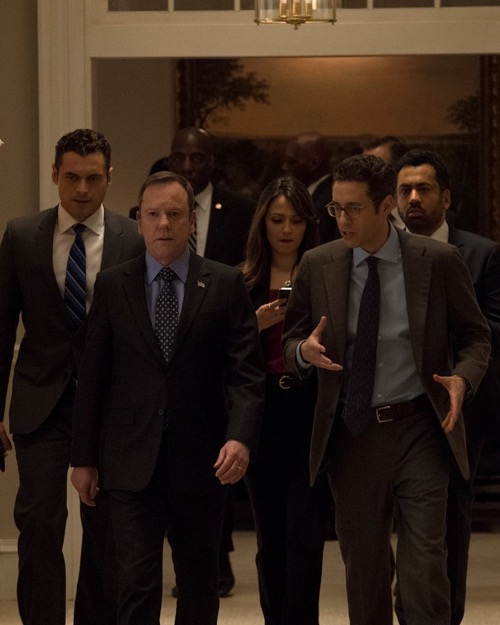 Tonight on ABC their new conspiracy thriller Designated Survivor airs with an all-new Wednesday, April 11, 2017, episode and we have your Designated Survivor recap below. On tonight’s Designated Survivor season 2 episode 17 called “Overkill” as per the ABC synopsis, “Following the deadly bomb explosion inside a D.C. metro station, President Kirkman declares war on Kunami. When the emir of that country sends his ambassador to negotiate, FBI Agent Hannah Wells learns the emir is hiding something that could have deadly consequences.”

Tom takes the oval to take part in a press conference. He announces that he has issued missile strikes against Kunami.

Hanna, Aaron, and Chuck are trying to figure out who their bomber was working with. Chuck finds a person of interest in a video they have. His name is Greg Bowen. He is a political advisor. They pull him in. He tells them he was acting on behalf of Emir. He wants to make a deal. He knows where an opposition leader is hiding out, one who is thought to be dead.

Seth speaks to the reporters in his daily briefing, informing them that the president has a decent approval rating with the people since he decided to strike back at Kunami. Meanwhile, Tom tells the general he wants soldiers on the ground. After the meeting, Lyor and Aaron argue about the president and how he appears to the public.

Trey comes to visit Tom. He wants to have lunch. He has canceled his recent trip. He is worried about Tom. He looks tired and drawn. Tom tells him it comes with the territory before leaving.

Tom heads to command and talks to Seal Team 3 on the ground who was with Hanna. She is now missing. She meets up with an Arab soldier and another Seal Team member named Royce. The Arab soldier tells them they need to move or they will die. He will lead her to her target. He had been promised $50k.

Tom and Emily meet with the Ambassador of Kunami. Unless Emir turns himself in they will continue to bomb Kunami, Tom tells him.

Back upstairs, Seth questions Tom if a war was the answer. Emily quickly jumps in to defend Tom.

Chuck is having issues with working with Damian. Aaron has promised Damian that if he can find the hacker he will be given a pardon. They find a lead and head to meet a woman. She gives them the name Gamine.

The Arab man that Hanna and Royce are following stops to pray. Hanna tells Royce she knows he is trying to lead them to an ambush. She is sure of it now given the way he is praying. She rushes him. He tries to attack her. She takes him out and grabs his phone. She calls Aaron he tells her to abort the mission. She refuses.

Mike informs Tom that Trisha in Lyor’s office has a brother named Royce who is part of the Seal Team. Tom decides he would like to go meet her later.

Aaron meets with Kunami Ambassador. He tells Aaron that Emir will step down for safe passage to a country of his choosing and access to his bank accounts.

Tom sits with Emily. He asks her what she thinks of all this. She tells them there are two views to this. He vents. She assures him he is the right man for the job. He tells her to reach out to the ambassador. Maybe they can end this war.

They are still out in the field. Hanna wants to come out shooting at an enemy truck. Royce talks her out of it.

Tom welcomes Trisha to the oval. She tells him that her brother re-enlisted because of him. He always does the right thing to keep America safe. Motivated, Tom steps in on Seth’s briefing to tell the reporters his stance on the war.

Hanna and Royce find their way to safety with Arab allies. Hanna sees correspondence that doesn’t make sense. She calls the White House.

Tom confronts the ambassador of Kunami. He set all of this up so he could see Emir abdicated. They take him away.

Aaron informs Tom and the others that Hanna and the rest of the Seal Team found Bio Weapons. Emir was going to use it on his people.

Trisha thanks Mike for looking out for her.

Trey comes to see Tom who is having a drink. He doesn’t know what the hell he is doing here. Trey tells him that you never really know what your choices will bring you, but when they are made by smart and caring people things end up okay.

Aaron and Lyor talk about Greg Bowen and how he turned. Lyor thinks that could have been him. Aaron tells him no way. He is decent. Aaron is called to see Chuck asap. They all meet up. The president’s therapy sessions have been leaked by their hacker.