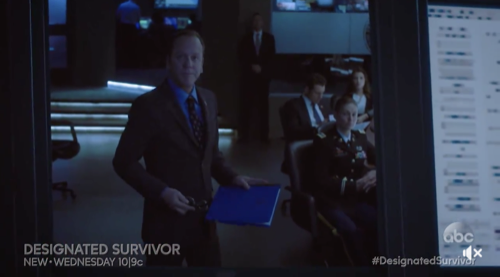 Tonight on ABC their new conspiracy thriller Designated Survivor airs with an all-new Wednesday, November 1, 2017, episode and we have your Designated Survivor recap below. On tonight’s Designated Survivor season 2 episode 6 called “Two Ships,” as per the ABC synopsis, “A U.S. Navy ship is stranded in enemy waters, so the president must negotiate the ship’s release before a massive threat to national security occurs. Meanwhile, Emily reconnects with someone from her childhood.”

A US destroyer collides with a ship carrying trash in enemy waters. Kirkman is briefed. There have been 16 causalities with hundreds still stranded out in the waters. Seth and Emily do damage control. Kirkman speaks with the captain.

Hannah continues to work on the Cray case. She can’t get Cray’s wife to work with them. Damon wants to talk about their kiss, but Hannah wants to drop it.

Aaron tries to talk to the Ambassador about rescuing those stranded at sea. Aaron calls it a humanitarian effort, but the ambassador isn’t allowing a second US ship on their waters. Aaron meets with Kirkman. If they try to go out there and rescue their people it could mean war. Kirkman needs the captain to know he is working on it. He hasn’t abandoned them.

Kirkman talks to the captain. They are running low on food. He asks the captain to address his people and tell them Washington is taking the diplomatic route. It could be a bit.

Kirkman and Kendra meet. The prosecutor in Alex’s mother’s case isn’t letting this go. Kendra asks Kirkman for access to his mother-in-law so she can squash this once and for all.

Emily isn’t acting like herself. Seth asks her what is going on. She shares that she is supposed to have lunch with her dad. She hasn’t seen him in 23 years since he walked out on her and her mother. Now she can’t go with everything going on. Seth tells her no excuses. She needs to go.

Emily goes to lunch with her dad. She gets right down to business. She wants to know why he wasn’t there. Why he missed all of her birthdays. Why he could disappoint a little girl. She attempts to say goodbye. He shows her a newspaper article he has been carrying around for more than a decade. It is an article about her and the spelling bee she won when she was younger.

Hannah and Damon meet with Cray’s wife and her lawyer. They are interrupted by news that the murdered House member’s assistant has been taken captive and for ransom. If they don’t release Cray and let him return to Malaysia, she will die. Hannah confronts his wife who denies any knowledge.

Kirkman finally discovers what Kunami wants in order for them to rescue the citizens stranded at sea – the US warship.

Hannah and Damon are informed that extradition is not on the table for Cray even if the woman’s life is on the line.

Kendra meets with Alex’s mother. She is emotional. Kendra tries to deal with her fears the best she can.

Kirkman gets word that the US destroyer is sinking. He talks with the Captain who informs him that the sink will ship within the next 5-6 hours. Kirkman and the crew must work fast to save the stranded sailors. They recreate the ships collisions. It seems that Kuwani purposely set up the collision.

Kirkman meets with the ambassador who denies any wrongdoing. He makes it clear if the US enters their waters, it means war. Kirkman doesn’t care. He wants to go in and save everyone. They pull it off and everyone is safe.

Kendra sits down with Alex’s mother again. She wants her lawyer to look at her case. Kendra pleads with her. She is the White House’s lawyer. She can help her. Alex’s mother confesses to lying to her daughter. She did have contact with Eric Little 6 months prior. She lied and Alex lied too because she thought her mother was telling the truth.

Emily finally finds her father running around the White House making friend with everyone while she deals with crisis after crisis. Her father asks to meet the president. He wants to get a picture with him and an invention he has. Suddenly Emily realizes why her father wanted to meet with her after all this time.

Hannah and Damon watch a 2nd ransom video that comes in. The assistant pleads for Cray’s extradition. She also begs them to send her lobe to her parents and her siblings. The video goes black. The research her family members and realize that she is an only child. She is signaling them. They figure out what she is trying to tell them – her location. They get the team together and rescue her.

Kirkman gets word that the captain is still in the shop. He won’t leave. He doesn’t want Kuwani to get the VDR information. Kirkman asks everyone to leave the room. He begs the captain to get off. He has his whole life in front of him. The captain refuses and goes down with the ship.

Emily is in her office. She is sad about her dad. Seth brings her comfort food. He tells her to listen once and listen good – she is the greatest thing since bread, air, water, all of it. And her father couldn’t see that. She stands and kisses him on the lips before hugging him tightly.

Hannah and Damon discover that Cray isn’t responsible for Thorn’s death. They are back to square one. Chuck has something though. He has found video footage of Senator Moss outside Thorn’s hotel room 5 hours before she was killed.