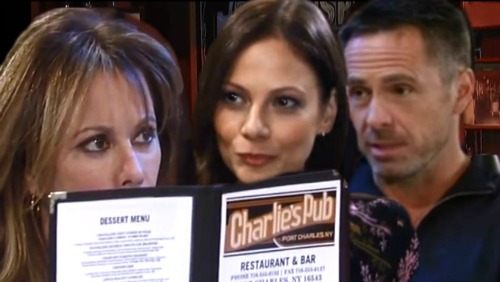 General Hospital (GH) spoilers reveal in a new video promo that a love triangle is brewing at Charlie’s Pub between former spouses, Julian Jerome (William deVry) and Alexis Davis (Nancy Lee Grahn) and newcomer, Dr. Kim Nero (Tamara Braun). Alexis has pretty much sworn off Julian, but can’t seem to stay away from him, and now that a new woman is paying attention to him, the green monster is emerging. Will Julian revel in Alexis jealousy over another woman, or will he find actually himself content with this mysterious new doctor Kim?

GH spoilers tease that ever since Kim Nero walked into Charlie’s Pub, and crushed Julian’s manhood by explaining that the only thing wrong with his new coffee machine was he hadn’t turned on the power button! There was clear chemistry between them. They were instantly casual and comfortable, no clashing and definitely no expectations. There was a light banter and Kim even joked that she preferred to call him “Charlie”, after she accidentally assumed that was his name, and he doesn’t seem to mind it one bit. 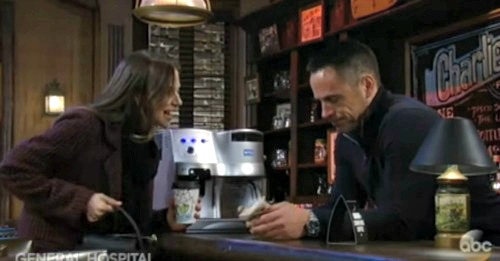 Cue in Ava Jerome (Maura West) who observes her brother, Julian, and Kim’s conversation, then points out how envious Alexis is, stewing at a table in the bar, staring intently at the same conversation – oblivious of everything else around her. Thankfully, Alexis has her loud mouthed, best friend Diane Miller (Carolyn Hennesy) with her, who attempts to get them out of the pub quickly, but Ava can’t help to relish in the moment as the truth does hurt!

General Hospital spoilers also reveal that after meeting Kim, Julian may have already felt the connection, because as GH fans will discover while Diane and Alexis are leaving the pub, Alexis will be shocked to learn that someone vandalized the pub by throwing a brick through his kitchen window. If Julian were desperate to win Alexis’ affections back, why didn’t he tell her when it happened? Wouldn’t she be the first one he’d turn to, not just for comfort but also legal advice?

Who do you think will win over Julian’s heart or is this even a competition? Is Julian really trying to get over Alexis is or is he simply using Kim to get Alexis back? Please let us know what you think!

Be sure to tune into ABC’s General Hospital (GH) to catch up on everything happening right now in Port Charles, especially what’s brewing in Charlie’s Pub! Check CDL General Hospital Spoilers often for updates, news and spoilers!