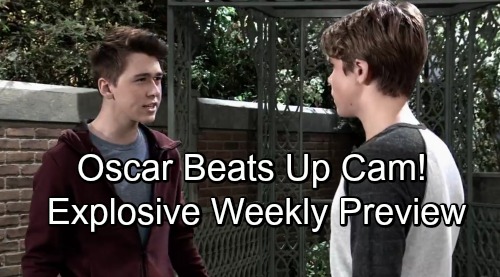 General Hospital’s new promo video for the week of September 10 through September 14 teases that we’re in for an action-packed week full of everything we love about GH. There’s a lot going on in this promo, so hold on! First off, Sonny (Maurice Benard) and Mike (Max Gail) struggle outside the pub in the aftermath of the explosion at Charlie’s pub. Sonny restrains Mike, who’s having a tough time and screams “Oh God, what have I done?”

Meanwhile, Chase (Josh Swickard) surveys the damage at the pub and announces that Charlie’s Pub has just become a crime scene. It looks like the back room of the pub is pretty demolished. This is bad news for Sonny and Jason (Steve Burton), who weren’t counting on this wrinkle in their plan to carefully monitor Julian’s (William deVry) renovation project. Jason is shown looking very worried about the situation.

The promo also shows Franco (Roger Howarth) and Liz (Rebecca Herbst) smooching lovingly. But GH spoilers say it won’t be long before a family crisis shakes up their happiness and even their upcoming wedding plans. The crisis could have something to do with Cameron (William Lipton), who is shown getting punched out by Oscar (Garren Stitt) for kissing Josslyn (go Oscar!).  It looks like the two boys may have a brawl, and Cameron could end up in trouble at home.

Next, Maxie (Kirsten Storms) and Peter (Wes Ramsey) are shown together in an elevator that is shown violently jolting to a stop. Might they get stuck between floors together? That may lead to a big discussion about Peter’s identity deception that they’ve been needing to have for a while now.

There’s some action at the Metro Court as well, with Curtis (Donnell Turner) shown taking down an unfamiliar guy and planting his face into a table! It looks like this will have something to do with Nina (Michelle Stafford), as Nina’s standing in the background watching the takedown transpire. Could this be about the search for Nina’s long-lost child? Whatever the case, it looks like Curtis is in protective mode!

In some additional quick flashes of drama, Carly (Laura Wright) is shown looking horrified, and Julian tells Ava (Maura West) that “it’s just another day at the office.” This is likely said before the pub goes up in smoke!

This is looking like an exciting, action-packed week! Be sure to stay tuned for all the drama. We’ll give you updates as other news comes in. Stay tuned to the ABC soap and don’t forget to check CDL often for the latest General Hospital spoilers, updates, and news.