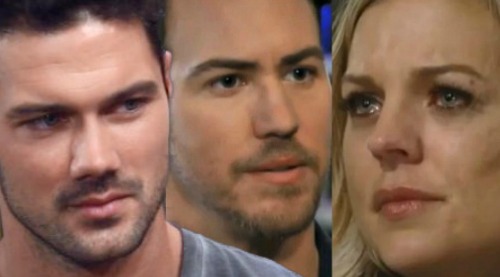 Of course, Maxie may not be in a place of total trust yet. Peter’s betrayal cut deep, so getting back to where they were will take time. They’re making significant progress though! Baby James has been a source of bonding for the duo. Peter’s always longed for a family, so spending time with his nephew is something he truly treasures.

Maxie clearly melts when Peter dotes on James and shares his feelings. She’ll continue inching close and closer to Peter through the kid. It won’t be long until Peter and Maxie are connecting in other ways, too. Maxie will slowly feel herself falling for Peter again. Things will be going great, but a sudden realization will bring trouble.

General Hospital spoilers say Maxie will deal with some guilt pangs. Once she accepts that she cares about Peter as more than a friend, she’ll have to reevaluate the situation. Maxie will feel like she’s being disloyal to Nathan (Ryan Paevey). GH fans know Nathan was a real sweetheart of a guy. He adored Maxie and would never want her to dwell on this loss forever.

Nevertheless, Nathan’s not around to remind Maxie of that. She’ll struggle to let her late husband go, which could lead to driving Peter away. What will Peter do about that? Will he back off and give Maxie the space she needs?

That probably depends on how much Maxie admits. If she just ghosts Peter without an explanation, it’s doubtful he’ll leave her alone. Peter will inevitably wonder what he did wrong, but he won’t be to blame this time. Maxie will just need a chance to make peace with moving on.