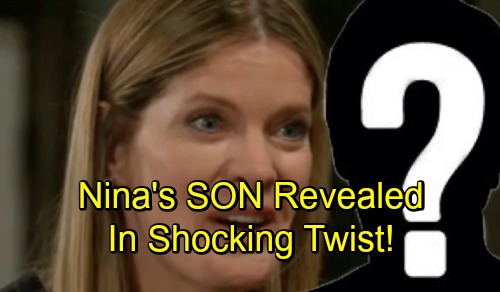 General Hospital (GH) spoilers tease that Nina (Michelle Stafford) will consider her options. After a chat with Maxie (Kirsten Storms), Nina will have to decide if she’s going to pursue her long-lost child. She believes her kid’s out there somewhere, but she can’t know for sure. Nina must know she could be completely wrong about the locket and its meaning.

Even if Nina learns she’s right, there are plenty of ways this could end in disaster. Nina will inevitably mull over the list of potential consequences. She would be heartbroken if she found her out child indeed exists, but was never able to track him or her down. That could make her pain downright unbearable.

Nina could also face rejection. Peter (Wes Ramsey) certainly wants nothing to do with Anna (Finola Hughes) at the moment. There’s no guarantee Nina’s grown child will want anything to do with her either. If Nina’s kid shuts her out, that’d just mean more sorrow.

Still, Nina will ultimately decide the payoff could be worth all the risks. If she doesn’t try to find and contact her child, she’ll always have to wonder. That’d be as painful as all the other options, so Nina might as well go for it. General Hospital spoilers say Nina will do just that, but what about Valentin’s (James Patrick Stuart) separate mission? Which one will uncover the truth first?

It’s possible Nina will even turn to Valentin for help at some point. Regardless, they’ll have to compare notes sooner or later. As this storyline moves forward, some surprising twists will come up. Could one of them involve the child’s gender? Madeline (Donna Mills) assured Valentine that Nina gave birth to a baby girl, but what if that was a lie? She might’ve had her reasons for deceiving him.

Of course, it’d serve Valentin right since he tried to throw Anna off the trail with a similar fib. Remember when he told Anna that she had a daughter, not a son? It provided an extra hurdle, but Anna eventually found her way back to Peter (Wes Ramsey) anyway.

If General Hospital wants to throw in a shocker here, they could make Nina have a son instead. Some viewers have suggested Chase (Josh Swickard) as an option. He’d be in the right age range and there are some secrets in his past. We’ll learn some strange things about his family down the road.

However, GH already had the big reveal of Chase being Finn’s (Michael Easton) brother. They followed that up by revealing a secret past with Nelle (Chloe Lanier). They may want to avoid making things totally ridiculous by adding another unbelievable bombshell.

In that case, Nina’s potential son would have to be someone else. Could it be a different guy we’ve yet to meet? General Hospital could use another villain, so it’d be interesting if Nina’s kid was a bad seed.

The show might stick with Madeline’s daughter story, but she can’t really be trusted. It’s wise to keep open minds about where this hot plot will lead! We’ll give you updates as other GH news comes in. Stay tuned to the ABC soap and don’t forget to check CDL often for the latest General Hospital spoilers, updates and news.