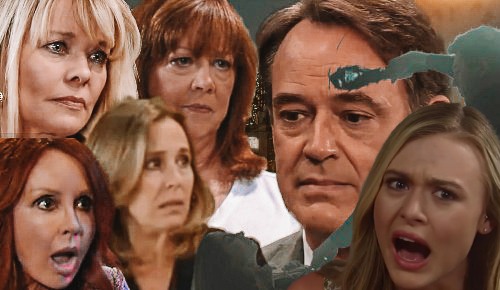 General Hospital (GH) spoilers tease that Ryan’s (Jon Lindstrom) deadly destruction will begin. He’s been taking some time to settle in Kevin’s (Jon Lindstrom) routine and get a feel for current Port Charles. It’s been many years since Ryan impersonated his brother, but it’s like riding a bike. Ryan has slipped back into the role with ease.

Of course, that doesn’t mean there haven’t been a few hurdles along the way. Laura’s (Genie Francis) return certainly threw off Ryan’s plans a bit. She’ll continue to pester this villain, so he’ll have to get creative. General Hospital spoilers say “Kevin” will nudge Laura toward a challenge. He’ll encourage her to run against Ned (Wally Kurth) in the next mayoral election, so she’ll eventually agree.

While Laura’s busy raising campaign funds, Ryan will deliver some fatal blows. GH fans can probably expect a victim or two around Halloween. Mary Pat (Patricia Bethune) may be a good option since she’ll get stuck in Ferncliff drama. Hayley Erin is also set to make her exit as Kiki, so the young Jerome may end up dead.

Ryan will likely find other victims before his stint concludes. He’ll want to do the maximum damage while he’s around. However, Ryan will have to be careful. He’s the kind of guy who craves recognition, but that’s exactly what he doesn’t need right now. Ryan can’t have anyone suspecting that he’s not the real Kevin.

Someone like Ava (Maura West) or even Griffin (Matt Cohen) could be framed for Kiki’s murder. Still, there could be questions when more bodies start piling up. It’ll become apparent that a serial killer’s on the loose in PC. Fortunately, the timing of all this could work in Ryan’s favor. The Invader’s doing a special anniversary edition to reflect on Ryan’s old killing spree.

It’d be easy for the cops to assume this was a copycat. General Hospital spoilers say Chase (Josh Swickard) will discover something ghastly on November 2, so he’ll be part of the investigation. As other corpses surface, Chase may think someone’s mimicking evil Ryan and his disturbing style. We can’t forget that everyone in Port Charles assumes Ryan is dead!

This may allow Ryan to get away with his actions for a while, but will his pride be his downfall? Can Ryan really stand by and let the glory go to someone else? Time will tell, but his Ava and Felicia (Kristina Wagner) obsessions will certainly get him in trouble, too. There’ll be other ways for Ryan to trip himself up and get caught.

General Hospital viewers will see some great twists and turns, so stay tuned. We’ll give you updates as other GH news comes in. Stick with the ABC soap and don’t forget to check CDL often for the latest General Hospital spoilers, updates and news.