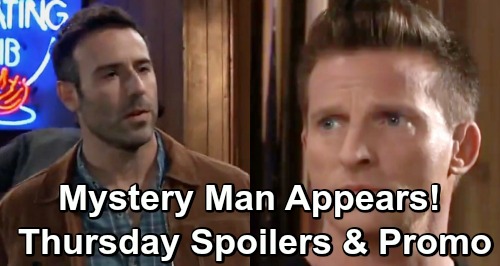 General Hospital (GH) spoilers for Thursday, December 27, tease that Anna Devane (Finola Hughes) will have a suggestion for Hamilton Finn (Michael Easton). She’ll flash a cute smile and state that Finn should move in with her. Finn’s practically attached to Anna’s hip these days, so he might as well!

While Finn reacts to Anna’s request, Kim Nero (Tamara Braun) will share a warm moment with Drew Cain (Billy Miller). They’ll reflect on everything that’s happened this year – some of it good and some of it grim. Drew will hate what Oscar Nero’s (Garren Stitt) going through, but he’ll be glad his son’s in his life. Both Kim and Drew will hold out hope that Oscar can have a long, happy future.

Other General Hospital spoilers say Laura Collins (Genie Francis) will seek help from a friend. She’ll turn to Felicia Scorpio (Kristina Wagner) and explain her latest concerns. Laura believes Kevin Collins (Jon Lindstrom) may be having another breakdown. What she doesn’t know is that Kevin has swapped places with twin brother, Ryan Chamberlain (Jon Lindstrom).

Laura’s just working with the info she has right now. She can see that “Kevin” isn’t acting like himself, so she’ll wonder if Felicia can assist her. Since “Kevin” is keeping Laura at a distance, she may hope Felicia can break down his walls.

Of course, Laura will be sending Ryan’s former obsession straight to him. He’s infatuated with Ava Jerome (Maura West) now, but this still sounds dangerous. Ryan could easily make Felicia another one of his targets, so GH fans should brace for more drama. He won’t be pleased when Felicia pokes her nose where it doesn’t belong.

In the meantime, Sonny Corinthos (Maurice Benard) will run into Margaux Dawson (Elizabeth Hendrickson) again. Jason Morgan’s (Steve Burton) name will come up during their conversation, so Sonny will show his protective side. He’ll point out that Margaux doesn’t have any leverage with Jason and try to confirm that she’s backing off.

Margaux will likely contend that she’s got bigger issues to worry about. There’s a killer on the loose in Port Charles and Margaux’s attempting to let go of her anger toward Sonny anyway. Going after Jason just wouldn’t be worth it.

However, the real point of this interaction will be to bring Margaux and Sonny closer. General Hospital spoilers say Jason won’t approve. He’ll corner Sonny eventually and warn that it’s best to steer clear of the DA. Carly Corinthos (Laura Wright) feels like Sonny’s on the verge of cheating, so every moment he spends with Margaux will make matters worse.

Finally, someone will be shocked to see Jason. A man will walk up and marvel at the face he recognizes. Since somebody from Drew’s past is supposed to appear this week, it seems this man will mistake Jason for his brother. They looked identical many years ago (when they were still identical identical twins before Drew’s accident!), so this mystery guy must be someone who knew Drew back then.

Jason may fill this man in and send him in Drew’s direction. Will some startling clues about Drew’s history surface? We’ll give you updates as other GH news comes in. Stay tuned to the ABC soap and don’t forget to check CDL often for the latest General Hospital spoilers, updates and news.