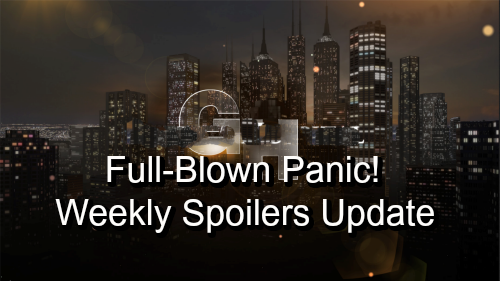 General Hospital (GH) spoilers update for the week of October 15-19 tease that we’ll see some tough predicaments. First, let’s talk about Brad (Parry Shen) and the pressure he’s facing. He’ll be in full-blown panic mode, which will probably have something to do with Nelle (Chloe Lanier). A quick chat with her may leave Brad fearful about what she’ll spill and when it might happen.

Elsewhere, Liz (Rebecca Herbst) and Sam (Kelly Monaco) will have a deep discussion. There’s a good chance Drew (Billy Miller) and Oscar (Garren Stitt) will be at the heart of their chat. They’ll worry about both of them, but all they can do is offer support if asked. Of course, Drew will have something else on his mind this week as well. He’ll have to mull over Margaux’s (Elizabeth Hendrickson) big offer.

Drew turned down the chance to get his memories back, but could he ultimately change his mind? It seems Drew will at least consider the idea of turning on Sonny (Maurice Benard) and securing the flash drive. Over with Jason (Steve Burton), he’ll ask Monica (Leslie Charleson) for a favor while Lulu (Emme Rylan) faces a crisis. Her strained marriage will leave her with questions about the future.

Maxie (Kirsten Storms) will pretend to be surprised later, so that may be about Lulu and Peter’s (Wes Ramsey) “date.” She overheard them talking about it recently and was visibly disturbed. Maxie may end up confronting the duo sooner or later, but she’ll also try to help at some point. Once Maxie hears the extent of Dante (Dominic Zamprogna) and Lulu’s issues, she may offer a pep talk.

Other General Hospital spoilers say Cameron (William Lipton) will make an impulsive move. Will he kiss Josslyn (Eden McCoy) again or perhaps spill something he shouldn’t? Oscar doesn’t want Joss to know he’s sick, so Cam’s been forced to struggle with the secret. That’ll continue to create complications in this tangled teen drama.

GH viewers will also see some bonding time for Bobbie (Jacklyn Zeman) and Kim (Tamara Braun). After Kim opens up about her Oscar fears, Bobbie will provide support. Across town, Alexis (Nancy Lee Grahn) will surprise Julian (William deVry). She’ll pay him a visit to talk about something important, so this might be about one of her daughters. Julian may be able to pitch in with Alexis’ problem.

Finally, Sonny (Maurice Benard) will have some reservations. As his plan to stop Margaux kicks off, Sonny may worry that he’ll just make things worse instead of better. General Hospital fans won’t want to miss the exciting scenes ahead. We’ll give you updates as other GH news comes in. Stay tuned to the ABC soap and don’t forget to check CDL often for the latest General Hospital spoilers, updates and news.