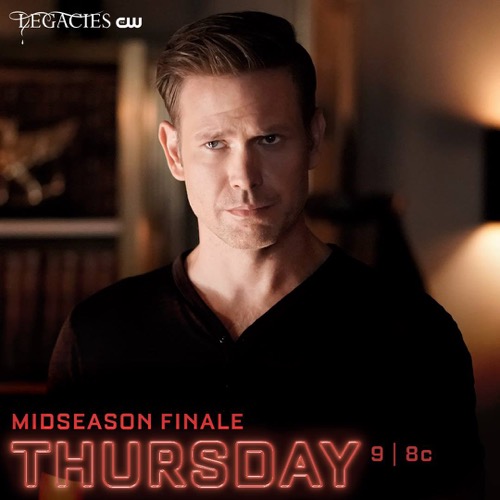 Tonight on the CW their new supernatural series Legacies air with an all-new Thursday, December 13, 2018 episode and we have your Legacies recap below.  On tonight’s Legacies season, 1 episode 7 Fall Finale called, “Death Keeps Knocking On My Door,” as per the CW synopsis, “Hope hits the books to learn more about the latest creature to arrive to the school, and things take a dark and twisted turn, leaving her to confront one of her darkest fears. Meanwhile, Alaric attempts to help Rafael cope after his past comes back to haunt him.”

A young teen girl walks through the night streets. Meanwhile, Hope and the others are writing letters to dead for Remembrance Day. Hope doesn’t see the point. The teen girl comes into the school. Raf sees her. It is Cassie, his dead girlfriend who he killed in a car accident that triggered his curse.

Hope talks to Dorion. He is working on trying to stop the necromancer from resurrecting anymore of their dead loved ones. Tomorrow he needs a day off for Remembrance Day. He sends Hope with books to bring to Rick. She makes a pit stop to talk to the necromancer. She tells him he is dead too and he has been brought back to find a knife. Otherwise, his kind has been erased from history. He doesn’t believe it Hope gives him the books. After a bit he goes into a rage. How can he be erased from history? She hopes to find out too. Hope wonders who is pulling his strings. He resents that but he knows he needs the knife and he wants to go to Malivore. Hope wants to know how to get there. She shows him a symbol that keeps popping up. He tells her it means death.

Rick has to stop Cassie from calling home. He offers what he can give her, a shower, food. She agrees and tells him and Raf she wants to talk about how Raf killed her. They are both silent.

Rick talks to Raf alone and tells him he needs to work to find closure. Meanwhile, Hope has brought MG with her to see the necromancer. MG helps her get into the necromancer’s head. On the inside, the necromancer tells Hope that he knows her father and he knows what she is trying to do, find out how he is. But first, they need to go on his journey. He walks around the busy streets of New Orleans before the necromancer ditches her. Hope returns to now and tells MG.

MG helps Hope return as she searches for the necromancer. Hope walks down a long dark staircase.

Raf apologizes to Cassie. It was an accident. She tells him she knows it wasn’t an accident. He took the turn to fast. She keeps asking him why. He gets upset and leaves. Meanwhile. Hope is stuck in pitch black.

Raf runs out of the school. Rick runs after him. Raf tells him he killed Cassie beck he was angry.

Hope shouts into the dark that she doesn’t need to know about her dad. She just wants out of here. On the other side, MG begs Hope to come back as she cries. The necromancer laughs. MG begs him to let her out of the head dive.

Raf and Cassie sit by the lake the next day. He tells her he is sorry. She forgives him but he needs to work on his issues and they include more than being a werewolf.

Rick comes to find Hope just coming out of the head dive. He is angry. They argue. Hope points out his drinking and lack of progress with his Malivore/Knife issue. He reprimands her. She tells him he isn’t her father. She takes off to go back to see the necromancer. She wants to know if her father is alone.

MG goes to Kaleb and tells him he needs to be strong, he needs human blood. They head to the cemetery where Remembrance Day is being held. MG gets a little overboard and almost kills an innocent kid feeding. Dorion stops him.

He necromancer admits to Hope he has been stalking her all this time to get the knife to open the gates of Malivore. The knife is one of three locks. He has just opened one with the hope of Cassie. He tells Hope her father isn’t alone but he won’t be happy until she is. He disappears.

Hope sits and writes a letter to her dad for Remembrance Day. She saw a glimpse of what loneliness is truly like. She’s going to work to find peace.

At the memorial, Raf and Hope talk. She realizes Landon is in trouble.