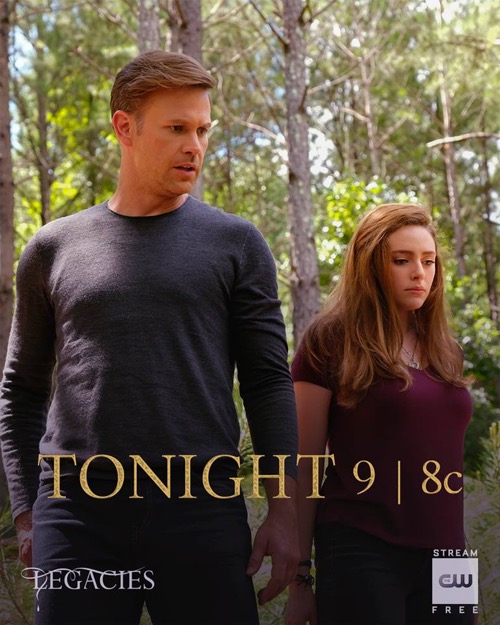 Tonight on the CW their new supernatural series Legacies air with an all-new Thursday, November 1, 2018 episode and we have your Legacies recap below.  On tonight’s Legacies season 1 episode 2 called, “Some People Just Want to Watch the World Burn,” as per the CW synopsis, “Alaric, Hope and Rafael hit the road in search of Landon, who’s sudden disappearance has raised some suspicion.

Meanwhile, during an annual flag football game against Mystic Falls High, Lizzie and Josie’s plan to stay under the radar quickly is derailed after Penelope gets involved.”

So make sure to come back between 9PM – 10PM ET for our Legacies recap.  While you wait for our recap make sure to check all our TV recaps, news, videos, spoilers, and more, here!

Legacies begins tonight with Hope Mikaelson (Danielle Rose Russell) watching several kids from Mystic Falls Timberwolves vandalize Alaric Saltzman’s ( Matthew Davis) Salvatore School van. She meets with Emma Tig (Karen David) who is questioning her about using black magic on school grounds. Hope feels this is absolutely her fight since Landon Kirby (Aria Shahghasemi) was on the property because of her; Emma worries what Hope will do when she finds him.

Josie (Kaylee Bryant) and Lizzie Saltzman (Jenny Boyd) are walking down the stairs when Lizzie asks her what she did, since she was busy purging this morning and now not hungry. Penelope Park (Lulu Antariksa) tells her the next time she wants to hack hr hair off, she needs to make sure her ex can’t rock a bob. Milton “MG” Gladstone (Quincy Fouse) greets them, but Lizzie orders him to “bounce.” Alaric finds the twins and disappoints them by saying he can’t make the game because he needs to find Landon, promising to be back as soon as he can; Lizzie wants to know who “we” are.

Hope finds Rafael Waithe (Peyton “Alex” Smith) fixing a vehicle and says he is going with them to find Landon as he is his friend and she seems vengeful. She wants to show him something, telling him to close his eyes. She shows him what his best friend Landon did to an entire bus. Alaric informs Hope that Rafael is coming with them as soon as he he fixes the car and puts a shirt on.

Lizzie is upset, saying Alaric loves Hope more than them; first he will miss their game and than their weddings. She feels they need to lose their games more epically than usual. Lizzie wants to recruit Rafael for the game, but Penelope informs them that Rafael is out of town, just like their dad.

Hope, Rafael and Alaric wander into the woods as Rafael thinks Landon wouldn’t leave because he doesn’t have a reason to run. Alaric finds a woman in the woods, who smells of smoke, he believes she is a survivor and wants to get her some help. Hope and Rafael will keep looking but are told not to engage as Landon could be dangerous.

The game between Mystic Falls and Salvatore School Stallions begins, Josie reminds Kaleb (Chris De’Sean Lee) that they are too lose today but Lizzie looks at her opponent who really angers her. Rafael tells Hope how Landon saved his life. He wants to get the knife back from Landon and asks her to hear him out. He’s heard all about Hope and here “sunny disposition”. Rafael promises her that he doesn’t lie and Hope reveals that Landon is in the root cellar, giving him 3 minutes.

Landon hugs him tightly, swearing it wasn’t him. Hope comes down and throws Landon against the wall telling her about the girl. Alaric tries to make a call and the girl takes it away from him, she quickly snatches his watch too; when he grabs her wrist she turns around with her eyes fiery red and she shoots fire out of her eyes, vanishing quickly.

Timberwolves are kicking Stallions butts, Lizzie is dying to burn Dana’s (Katie Garfield) perky little boobs. MG tells Penny that Lizzie is mad at him, but she tells him she did it on purpose because now the girl sees him for a change. She says she is willing to help him win Lizzie over, but he the next move he makes has to impress her.

Alaric calls the coach, informing him about the pyromancer he found wandering in the woods. He says he will find a way to help Alaric, also telling him the girls are killing it but not killing it. Lizzie throws the ball and MG catches it, throwing the game off completely. Dana tells MG he has nice hands while Lizzie gets more angry with him.

Rafael believes Landon, but Hope doesn’t. Landon didn’t want to steal from her and apologizes for all of it. Alaric comes into the cellar and confirms Landon’s story that there is a fire breathing witch on the loose. Landon tells him that he lost the knife in the woods and now they need to find it before she does, but as soon as they come out of the cellar she is there with her hand out. They run back into the cellar as she unleashes fire on them.

Hope puts up a protection spell and they have a pick of cell phones to use when Landon points out all the passengers’ stuff from the bus. At the game, Dana calls Lizze delusional, asking if she is like that because she hasn’t been to her mom’s pharmacy lately for her meds. Lizzie calls for the entire team to kick ass, and they all agree; with a little help from magic the Stallions are able to bring back the game.

The coach talks to Alaric and tells them they are not dealing with a pyromancer but a Dragon (Lauren Ridloff). Alaric says Dragon doesn’t exist but he is convinced when Hope shows him the knife as they are told they need courage and a sword. Hope emerges from the cellar confronting the Dragon, keeping her flames at bey with the knife. Rafael throws a rock to distract the Dragon, then he jumps in the air and is able to thrust the knife into the Dragon’s heart.

Josie reminds the team they need to lose the game like Alaric told them too. He had a reason for it, but Penelope tells them they have option three, to win without their supernatural sauce. Lizzie tells Satan that was a good idea, to win it fair and square. Rafael hands Hope the knife back, saying his promise was kept. Alaric tells them to find a shovel so they can give her a proper burial.

Dorian Williams (Demetrius Bridges) calls back, saying a knife to the soft spot will kill it, but Alaric says a knife to the heart will do. Alaric tells him it has to be something else, but hangs up the phone saying it’s definitely a dragon, as she rises from the ground a full fire-breathing dragon. Hope tells Rafael and Landon to get to the car as the Dragon will be back for the knife, Alaric asks if she came with a death wish.

Stallions are determined to win the game on their own merit and while Dana comes for Lizzie, Josie knocks her over only to make sure that her team doesn’t win the game. Lizzie is thoroughly disappointed.

The Dragon circles the forest as Hope uses the dad card, forcing Alaric to take cover while she uses a chant when the Dragon approaches her. Everything goes white and Hope wakes up with the knife beside her and the woman on the ground beside her. Hope demands for the woman to tell her why she needs the knife, asking her to say something; she turns her head and her eyes turn red. Alaric runs in and stabs her in the neck killing her.

Josie tells Dana “good game” and she calls Josie a loser; which causes Lizzie to punch her in the face and a fight breaks out between teams and fans alike.

Alaric is angry with Hope for using black magic, realizing she had the death spell for another reason than the dragon. He gets that Landon did something stupid or maybe evil, but he is just a kid and so is she. He feels this hatred and vengeance is her father and won’t allow it. He tells Hope to bury the dragon and will see her back at the car.

Back at Salvatore School (SS), MG comes out the shower and Penelope thinks its time for a strategy session. She thinks Dana liking him is a total win for him. She may hate Lizzie, but maybe she just wants to see the world burn.

Josie comes to see Lizzie who has a black eye; she also reveals that she did a spell to make Kaleb drop the ball and confesses to doing black magic with Hope. Lizzie tells Josie she betrayed her. Josie didn’t want to disappoint their father, so she disappointed her twin instead. Lizzie will forgive her as long as she promises not to keep secrets about doing black magic with Hope, who made them feel like they didn’t matter from girls like Dana and Hope, and from their dad. They both had each other’s back today and ask what they are going to do about their dad and worry what Alaric is going to do to them?

Hope comes out of the woods and Alaric reveals Rafael and Landon have taken off, leaving Hope a note. Landon is sorry he lied to protect himself but is sorry he hurt Hope. Alaric returns home to his girls, holding them tightly as Hope reads on how Landon promises that the school secret is safe with him. Hope cries as she looks the family photo of all the Mikaelsons.

Dorian finds Alaric checking the gates, asking if he is worried about people getting out, but Alaric confesses he is worried about what is trying to get in. He feels they have gotten cozy and careless, forgetting how nasty the world is. He doesn’t know the story behind the knife, but he saw something today that scared him; something he never thought he’d see. He opened the school to protect the kids and his daughter but how is he supposed to protect them from things that aren’t supposed to exist. Inside the gates, is a statue that’s eyes suddenly glow red and it begins to move.