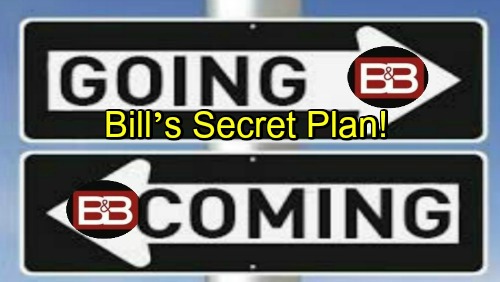 The Bold and the Beautiful (B&B) spoilers tease that we’ve got some comings and goings news to pass along. For starters, Kelly’s nanny will be back for another appearance. Nicola Posener will reprise the role of Amelia on a new B&B episode July 31. Bill (Don Diamont) will have a big surprise for Steffy that day, so maybe he’ll need Amelia’s help with that.

B&B fans can expect Bill to order a brand-new nursery for Kelly. He’ll have his minions scurry around and get everything ready for the baby. Amelia may be on hand to watch Kelly while Bill’s busy pulling this off. As for Steffy, she’ll probably be stuck shutting down all the complaints about her relationship. Steffy will definitely have plenty of heated confrontations this week.

Once the nursery’s finished, Bill will call Steffy over. That’s where another guest star may come in. The Bold and the Beautiful spoilers say Matt Shevin will appear as Bill’s driver. Perhaps Bill will send a car out for Steffy and show her all the perks of being with him. Bill certainly intends to pamper the new lady in his life. The same goes for Steffy’s lovely daughter.

Steffy will eventually arrive to accept Bill’s latest gift. The Bold and the Beautiful spoilers say she’ll be blown away by the impressive nursery. Steffy will see that a lot of thought went into it. She’ll begin to sense that Bill truly cares, so that could move their relationship in a more romantic direction.

Bill will insist that it’s time to begin their life together. He’ll think their family’s got a bright future ahead, but they have to make it official. It looks like Steffy will take the leap and become Bill’s wife. In other news, a B&B alum has two reasons to celebrate. Linsey Godfrey (ex-Caroline) recently had a birthday AND announced her upcoming debut on Days of Our Lives.

This was pretty much the worst-kept secret of the soap world, so most fans knew Godfrey had scored a DOOL role. However, it was nice to get confirmation from Godfrey herself. She’s thrilled about playing DOOL’s Sarah Horton, so she shared some updates on Twitter. Godfrey said, “I’m such a lucky birthday girl!! I’m so excited and honored to join the incredible cast of @nbcdays!”

If you want to catch Godrey as Sarah, be sure to switch over to Days of Our Lives this fall. That’s it for comings and goings. We’ll keep you posted as other B&B details emerge. Stay tuned to the CBS soap and don’t forget to check CDL often for the latest Bold and the Beautiful spoilers, updates, and news.