The Bold and the Beautiful Spoilers: Liam Stands by Hope After Bill’s Trick Revealed – Steffy’s Heart Breaks All Over Again

BY Kinsley Goldman on May 17, 2018 | Comments: one comment
Related : Soap Opera, Spoiler, Television, The Bold and the Beautiful 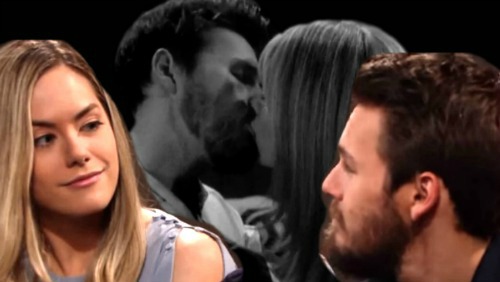 The Bold and the Beautiful (B&B) spoilers tease that Bill (Don Diamont) and Wyatt (Darin Brooks) will reach an agreement. Katie (Heather Tom) will insist that a deal is for the best, so Wyatt will keep his mouth shut about his dad’s deception. In exchange, Bill will keep his promise to give Wyatt the keys to the kingdom someday. He’ll likely give “Watie” the green light to marry well.

All of that sounds like great news for Wyatt, but the guilt should be unbearable. Wyatt could easily crack sooner or later. Even if he manages to keep this secret, it’ll inevitably come out anyway. Someone else could eavesdrop and expose Bill’s sneaky plan. Ridge (Thorsten Kaye) could even trick Bill into incriminating himself or Steffy (Jaqueline MacInnes Wood) could simply pry the truth out of him.

Regardless, it’s clear that Bill’s going down! Liam (Scott Clifton) will ultimately realize he was wrong about Steffy’s continued betrayal. Her involvement with Bill was a hookup and nothing more. Liam will hate that he thought the worst of Steffy, but who could blame him? It takes time to rebuild shattered trust and “Steam” just hasn’t made it to that point yet.

Nevertheless, Liam will undoubtedly apologize to Steffy and fill her with hope for the future. Steffy will believe they can get their life together back on track. She’ll breathe a sigh of relief and assume this nightmare is over.

Unfortunately, B&B fans know that may not be the case. Liam’s heart is awfully fickle, so there’s no guarantee he’ll return to Steffy immediately. A “Steam” reunion seems likely down the road, but The Bold and the Beautiful shouldn’t skip the drama of rejection.

Will Liam say he’s sorry and push Steffy away? His feelings for Hope (Annika Noelle) have been growing since she came back to town. It’s reasonable to think Liam would want to honor his promises to her. He could ditch his previous choice and stay by Hope’s side.

Liam won’t like the fact that Bill’s manipulation is the reason, but that won’t change how he feels about Hope. Is Steffy headed for another round of devastation? Will Liam break her heart all over again?