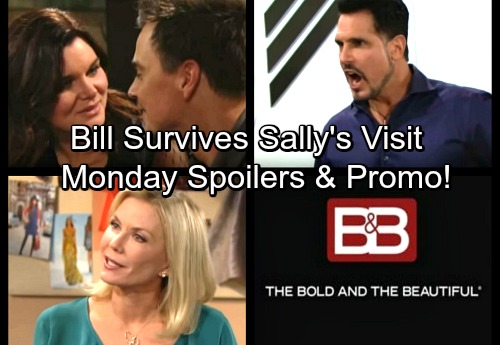 The Bold and the Beautiful (B&B) spoilers for Monday, February 26, tease that Bill (Don Diamont) will wonder what Sally (Courtney Hope) thinks she’s doing. After a trip to the shooting range, Sally marched back over to Spencer Publications and grabbed Bill’s golden gun. She fired a shot for an epic Friday cliffhanger.

However, it turns out Sally pumped a bullet in “Sky” instead of Bill. She’ll suggest she was sick and tired of looking at that dumb skyscraper replica. The Bold and the Beautiful spoilers say Justin (Aaron D. Spears) will manage to wrestle the gun away and hold Sally back. Things will definitely be a bit chaotic. 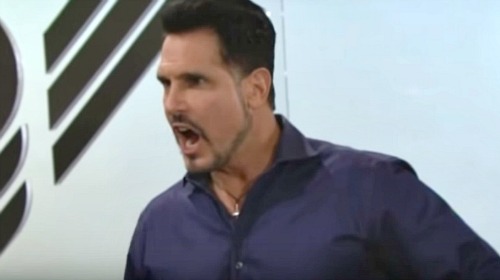 Bill will insist that Sally needs to get out his office. He’ll shout that he never wants to see her face again. Before she heads out, Sally may offer a warning. She’s an expert shooter, so she might argue that she won’t miss next time.

Once Sally’s gone, Bill will continue to seethe. He certainly won’t be in a good mood, so this isn’t the ideal moment for Wyatt (Darin Brooks) and Katie (Heather Tom) to share their big news. Nevertheless, this newly engaged couple won’t be willing to wait. They might as well get the ball rolling. 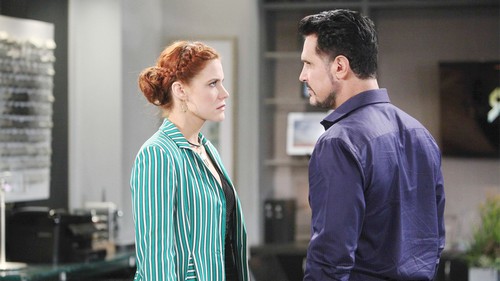 Katie and Wyatt want a future together, so they need to rip the bandage off. They have to tell Bill before they can take the next step, which is obviously a wedding. The Bold and the Beautiful spoilers say Wyatt and Katie will form a plan. They’ll discuss how they’re going to tell Bill and respond to his potential objections.

Wyatt and Katie will hope they can all work through this like rational adults. Unfortunately, Bill is a belligerent man child. This conversation is sure to be a complete disaster! Stay tuned for some vicious threats on Tuesday’s B&B episode. 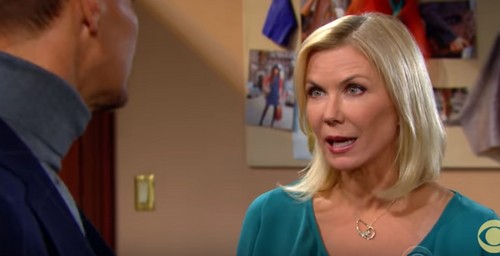 Meanwhile, Brooke (Katherine Kelly Lang) will have a chat with Thorne (Ingo Rademacher). It looks like they’ll talk about Katie relationship with Wyatt. Brooke will point out that they seem to get along and support each other. She’ll hope that this romance is built to last.

Thorne will still wish he could’ve had a shot with Katie, but he’ll just have to move on. Perhaps another lovely lady will walk into his life when he least expects it. We’ll give you updates as other B&B details emerge. Stick with the CBS soap and don’t forget to check CDL often for the latest Bold and the Beautiful spoilers, updates and news.