The Bold and the Beautiful Spoilers: Thursday, October 18 – Brooke Explains To Steffy – Pam Worries About Ridge and Thorne’s Anger

BY hellodrdavis on October 17, 2018 | Comments: one comment
Related : Soap Opera, Spoiler, Television, The Bold and the Beautiful 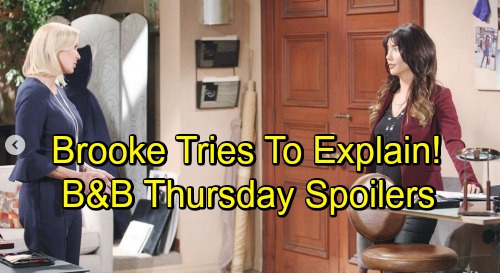 The Bold and the Beautiful spoilers for Thursday, October 18, tease that Brooke (Katherine Kelly Lang) will reach out to Steffy (Jacqueline MacInnes Wood) about the recent unpleasantness regarding her kiss with Bill (Don Diamont). Steffy’s the one who saw Brooke and Bill kissing and broke the news to Ridge (Thorsten Kaye), so Brooke may feel that she needs to do some explaining to Steffy.

Steffy will naturally be wary of Brooke’s excuses, as Steffy’s very protective of her father. But Brooke will probably point out that she’s not the one who instigated the kiss with Bill, and that she put a stop to it right away. Still, Steffy will likely want to know why Brooke and Bill were spending tiime together in the first place, and Brooke will have to explain that as well.

B&B spoilers say that Brooke will also express her concern to Steffy about the tension between Ridge and Bill. Brooke may want some help from Steffy to gauge what Ridge is capable of and to help talk him down from doing anything rash to Bill. But will Steffy help Brooke?

Meanwhile, on the new B&B episode on Thursday, October 18, Ridge will want Pam (Alley Mills) to track down Bill for him. Of course, Pam will still be on a high from Charlie’s (Dick Christie) sweet marriage proposal and will want to be showing off her engagement ring around Forrester, but she’ll do as Ridge asks.

Pam will be worried, though, due to Ridge’s angry demeanor and she’ll sense that trouble is brewing for Bill. Bill and Thorne (Ingo Rademacher) have themselves riled up about Bill and his recent actions. Ridge can’t stand it that Bill kissed Brooke, and Thorne is livid that Katie (Heather Tom) decided that Bill doesn’t have to live by the terms of the sole custody agreement. Pam’s right; trouble is definitely brewing.

It sounds like a lot of B&B drama is heating up on Thursday’s episode, so stay tuned! We’ll give you updates as B&B news comes in. Stick with the CBS soap and don’t forget to check CDL often for the latest Bold and the Beautiful spoilers, updates, and news.