The Bold and the Beautiful Spoilers: Tuesday, May 15 – Wyatt and Bill Face Off – Steffy’s News Enrages Taylor, Brooke Targeted

BY Marcy Cohen on May 14, 2018 | Comments: one comment
Related : Soap Opera, Spoiler, Television, The Bold and the Beautiful 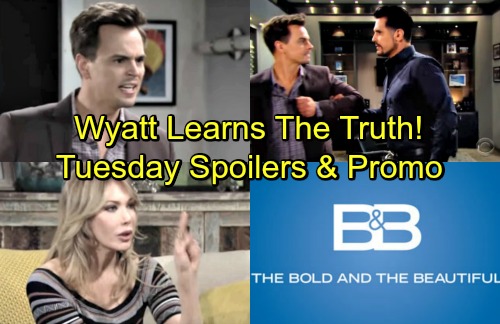 The Bold and the Beautiful (B&B) spoilers for Tuesday, May 15, tease that Wyatt (Darin Brooks) will barge in Bill’s (Don Diamont) office and demand answers. Thanks to Justin (Aaron D. Spears), Wyatt knows Bill used him to destroy Liam (Scott Clifton) and Steffy’s (Jacqueline MacInnes Wood). He’ll be furious as he pushes his dad to admit that it’s true.

Wyatt will feel like a fool for buying Bill’s web of lies. He’ll insist that Bill needs to be held accountable for this mess. Steffy and Liam aren’t the only ones getting hurt here. Bill is playing games with Hope’s (Annika Noelle) heart, too. She’s bound to be devastated by the time all this is over. 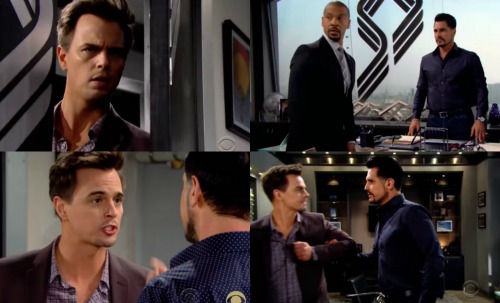 This could also damage Liam and Wyatt’s bond as brothers. They’ve been sharing some nice moments lately, but it’s all because Wyatt told Liam the “truth.” Although Bill’s to blame for the confusion, Wyatt will want to clear this up ASAP. He’ll fear that he may get caught in the aftermath. The longer Wyatt waits to make a confession, the worse things will be.

Of course, Bill won’t let Wyatt walk out that door and ruin everything. He’ll try a mixture of threats and bribes to keep his son quiet. The Bold and the Beautiful spoilers say this will become a tricky situation for Wyatt soon enough. 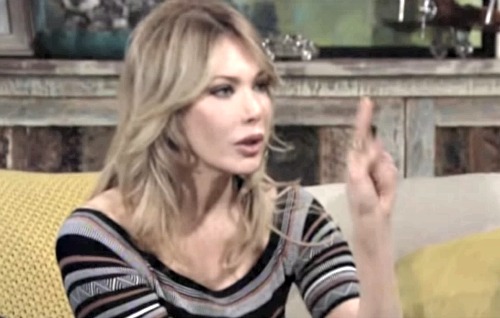 In the meantime, a distraught Steffy will open up to Taylor (Hunter Tylo). She’ll recap the latest Liam developments and fret about his engagement to Hope. Steffy will also bring up Brooke’s (Katherine Kelly Lang) recent outburst. She’ll fill Taylor in on all the nasty statements Brooke made and get some sympathy in return.

Taylor will obviously be on Steffy’s side, so she’ll rage about Brooke’s cruel comments. B&B fans can expect Taylor to take action eventually. The Bold and the Beautiful spoilers Taylor and Brooke will have a fierce faceoff later this week, May 14-18. Neither one of them will hold anything back!

It sounds like the excitement’s revving up on the CBS soap. We’ll give you updates as other news comes in. Stay tuned to B&B and don’t forget to check CDL often for the latest Bold and the Beautiful spoilers, updates, and news.