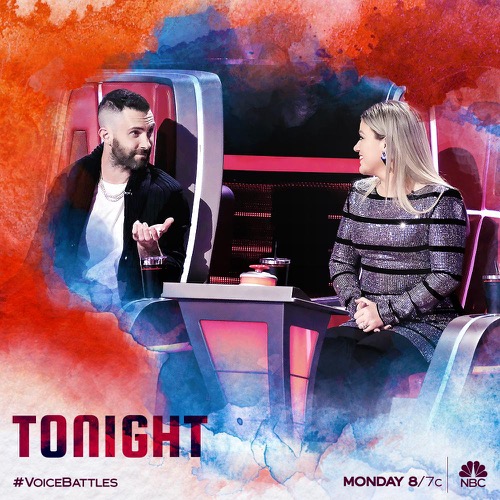 Tonight on NBC’s Emmy Award-winning musical competition The Voice airs with an all-new Tuesday, October 22, 2018, season 15 episode 9 and we have your The Voice recap right below. On tonight’s The Voice season 15 episode 8, called, “The Battles, Part 3,” as per the NBC synopsis, “The “Battle Rounds” continue as the coaches enlist music industry powerhouses Keith Urban, CeeLo Green, Halsey and Thomas Rhett to prepare their artists to go head-to-head with the hopes of advancing to the next round – The Knockouts. Tonight, surprises abound as the artists take on songs ranging from 80s country to modern pop hits, which lead to electrifying performances and debilitating decisions.”

The contestants were now doing the hard part of having to battle to become “The Voice” on tonight’s all-new episode.

The first pairing of the night came from Team Blake. Blake paired Keith Paluso and Dave Fenley because they both had that edgy ruggedness to their voice and, well, Blake was only going to need one of those. He had Keith Urban as his guest coach there to help and together they both noticed something with one of the singers. They both saw that there was a hesitancy with Keith Paluso. He wasn’t as confident as Dave and it truly began to show in that lead up to their battle. The singer kept dropping lines to the song and he wasn’t connecting as well with this song as the man he was singing against. Dave, on the other hand, was perhaps too confident because his voice would slur words as he got excited. And so two guys each had their problems though Keith Paluso was the one that worried Blake.

Luckily, Keith remembered the words for the final performance. He and Dave sang “One Woman Man” and it had been such a great performance for the both of them that three remaining judges that were supposed to be impartial just couldn’t do it. They loved both guys and Adam gave extra credit to Keith because he knew that Keith wasn’t even into country. He was a rocker and that’s why he wanted him for his team the first go around. He had been blocked from getting Keith on his team by Blake and, when Blake chose to Dave over Keith, Adam had been quick to steal him. He used one of his two steals for Keith and was now on par with both Kelly and Blake. They too had just the one steal left while Jennifer had already used both of hers.

The second of the pairing of the night came from Team Adam. He wanted to pair his baby faces and so he put together the teenagers. Reagan Strange and Emily House were unfortunately friends. They had met each other right before auditions and so neither of them had wanted to battle the other, but their friendship had been pretty good for their song. They were given the song “Photograph” by Ed Sheeran and the sweet moments they in which they just looked at each other went well with the song. There were other pairings that failed because the two singers didn’t have any personal feelings attached to their music and they were singing a song that was supposed to be about chemistry. And so it was a bit wrong when these two girls had to sing against each other.

Adam had his friend CeeLo Green there to help and together they helped these two young women go where they needed to with their voices. They both have a soft quality to their voices with Emily having a deeper sense of control over hers and Regan having a more of a lyrical tone with her voice. Adam had loved later fallen in love with their performance because it had been sweet and the other judges thought so. They didn’t want to choose between the babyfaces because they were still kids in many ways and no wanted to disappoint either one of them. So they left that to Adam. Adam hadn’t wanted to choose and ultimately he was a force to because he could only take one of them with him. He thought the winner of that battle was Regan and he like Emily was probably disappointed when no one decided to steal her.

The third pairing of the night came from Team Jennifer. She wanted to pair her own powerhouses and so she set up Franc West and Matt Johnson for a battle. Both guys could hit those high notes like no one else and funnily enough, her friend Halsey wanted them to pull back some. The guys could show more range and so both their coach and Halsey showed them how. They helped the guys with their song “Too Close” and it had lead to a great performance. The judges all loved when they went low and, while no one wanted to pick sides, they did. Blake was leaning more towards Franc and Kelly loved Matt. Matt was the same guy that has been trying out since Season 1 and so again it had been hard when Jennifer made her choice. She chose Franc as the winner of the battle and sadly no one had wanted to use their last steal to save him from elimination.

The judges with a steal left wanted to save that for people they truly couldn’t pass on. Kelly thought her first pairing of the night had two worthwhile singers and that no one would be left disappointed. She paired Abby Cates with Delaney Silvernell because they were both into soulful pop and had the same relaxed vibe. Their differed in that Delaney had more control over her voice and Abby had more emotion. Their coach gave them the song “Love Me Like You Do” and it was notoriously difficult for a live show because it had all the accompaniments that made it a great recording. And so Kelly truly tested the ladies with this song. She and her friend Thomas Rhett had helped the girls with singing this song onstage and had told them that the way to win was to capture the low moments in the song just as well as those high notes.

The song wasn’t meant as duet and so Kelly had broken the song into two meaning that each person sang one verse. Only Abby was the one that got the really good lines. She had gotten all the ending oohs and aahs while Delaney’s voice ended up more in the background of that and so it was no surprise when Kelly chose Abby. Its just fortunate that someone else wanted Delaney. Adam used his last steal to get Delaney for his team and so only Blake and Kelly had theirs left. There had been several other battles tonight that hadn’t been as highlighted and each judge had a team that was truly shaping up, but the steals were still available and the next pairing had come from Team Adam. And he surprised everyone by pairing Jake Wells and Natalie Brady.

They were both rockers, however, Jake was more soft rock while Natalie was the same person that sang “Barracuda” as her audition song. There didn’t seem like there was any common ground between them and at first, their pairing hadn’t worked. They were given the song “Closing Time” and it didn’t work with Jake going in cool and Natalie going in hot. Then Adam was like ‘hey, maybe we should strip down this song’. He left the song with just a piano and it practically changed the song. It also changed Natalie’s range. She took the song slower and the way she sang the song a duet with Jake was amazing. Both Adam and CeeLo said that after the show they should definitely do something together and so Adam had been right to pair them.

The other judges hadn’t seen what he has seen until they heard the two sing together and that’s when they went ‘oh, Adam did a good job’. Adam had brought out something no one else had seen back during the blinds and all the judges had been amazed by Jake. Jake only had one person turn around for him and so he felt validated when the other judges praised him for his performance. They loved Natalie too and so Adam had hoped that once he chose Adam that someone steals Natalie though no one did. The others were shopping for something else and Kelly for one had wanted to get a guy for her team. She mostly had women and so she was truly holding out for a guy. And, well, Jennifer provided her with one.

The final pairing of the night came from Team Jennifer. She paired Zaxai with Tyshawn Colquitt and the two guys had a soulful tone. She gave them the song “Love Lies” because she wanted to see their different takes on this beautiful song that was just full of soul and it had been so good that everyone had loved it. Especially Kelly! Kelly had been blocked when she first wanted Zaxai back during the blinds and so she tried to convince Jennifer to correct that wrong. It had been Jennifer that blocked her and so Jennifer at least knew that if she chose Tyshawn that there was still a spot open for Zaxai. And while she wouldn’t know what could have happened if she chose differently, she decided to name Tyshawn as the winner of that battle. And Kelly used her last steal to get Zaxai for her team.