BY hellodrdavis on October 29, 2018 | Comments: one comment
Related : Soap Opera, Spoiler, Television, The Young and the Restless 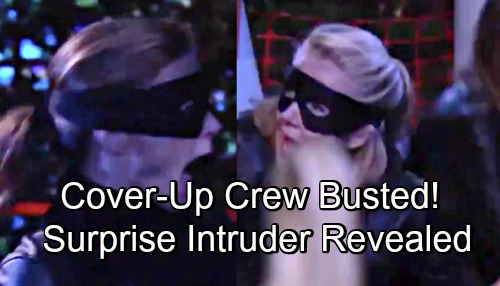 The Young and the Restless spoilers tease that the cover-up crew is in for a big, and unwelcome, surprise. After Vikki (Melody Thomas Scott) learns that a water pipe has burst under the sculpture in Chancellor Park, the ladies of the cover-up crew will go on a mission. It looks like the goal will be to find and move J.T.’s (Thad Luckinbill) body, since they know the area’s soon going to get attention due to the burst pipe.

But Vikki, Phyllis (Gina Tognoni), Victoria (Amelia Heinle), and Sharon (Sharon Case) are going to have a harrowing mission. Donned in black eye masks, they’ll go digging. But it won’t be long before they’re interrupted by someone who bursts onto the scene. The weekly promo shows the ladies getting a frightful shock. But who will interrupt them? There are a few possibilities.

First off, there’s Nick (Joshua Morrow), who seems to be trailing Sharon everywhere these days, mostly out of jealousy to see if she’s hanging around with Rey (Jordi Vilasuso). He could very well follow Sharon and the rest of the ladies to Chancellor Park and become curious about what the heck is going on.

Then, there’s Rey, who is interested any time the four cover-up ladies are together. He’s always lurking around some corner, watching what they are doing and just knowing that they’re not discussing charity functions. Plus, he’s more than a little interested in Sharon and might be following her for that reason.

Jill (Jess Walton) will be back on canvas this week and is another contender for who will interrupt the cover-up crew. Jill is the one who had the sculpture put in Chancellor Park in the first place, so naturally she’d be interested if people were on-site digging up the land there. She might notice what the ladies are doing and demand answers.

Tessa’s (Cait Fairbanks) another distinct possibility for the surprise intruder. Y&R buzz is that Tessa could be the blackmailer, since she’s in desperate need of money and seems to always take an interest in what the coverup crew is chatting about. If Tessa’s the blackmailer, she might be watching the ladies very closely and could follow them to the sculpture scene.

And finally, what about Victor (Eric Braeden) as the surprise intruder? He always seems to have his finger on the pulse of what’s going on in his family, and he may secretly know about the J.T. situation, unbeknownst to Nikki. What if he’s already moved the body to protect Nikki and Victoria and then he shows up on the scene to stop their mission before someone else sees them digging? Could happen.

Who do you think will interrupt the coverup crew’s mission? Stay tuned to the CBS soap and don’t forget to check CDL often for the latest Young and the Restless spoilers, updates, and news.