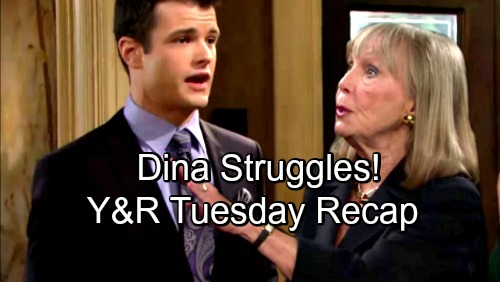 Once alone, Mariah thanks Abby for helping out, but Abby admits that after seeing what Devon (Bryton James) and Lily (Christel Khalil) are going through; she is doing this for her brother, realizing how important family is.

At the crack of dawn, Kyle (Michael Mealor) and Ashley (Eileen Davidson) are shocked by Phyllis (Gina Tognoni) and Billy (Jason Thompson) who arrive at their doorstep, announcing they are temporarily moving in. Ashley wonders aloud, how “temporary” it will be, considering how long they lived at Summer’s (Hunter King) place.

Phyllis suggests they move into the pool house, but they quickly learn from Kyle that it is occupied! Ashley says Billy would know that had he not ambushed them. Billy reminds her that the house was built by John Abbott (Jerry Douglas) and he has every right to be there, whether they like it, or not!

Ashley bitterly tells him, he doesn’t need to remind her that he is Dad’s son as Billy is not surprised by their fake hospitality. When questioned about why they are no longer staying with Summer, they say it was too crowded and Billy will thoroughly enjoy living at the Abbott house so he can keep an eye on his enemies.

While Billy unpacks, Phyllis reveals she was the one behind the text to Summer and that she deserves to be on the private cruise with no wifi nor cell service so she can think about everything she’s doing. Kyle approves as Phyllis informs him that her and Billy have talked things out and now Summer knows she is not to be trifled with. Phyllis warns Kyle that she will not tolerate any more ill advised stunts.

Jack (Peter Bergman) is enjoying breakfast with his mother, Dina (Marla Adams) at GCAC, when Dina demands they bring home the remainder of her food home for her dog, Piper. Billy and Phyllis stun Jack, when he returns with Dina, sharing their news about their new living arrangements.

Dina is confused, so Billy says they are family friends and will be staying there for a while as Phyllis says it will be fun spending time together. Jack brings Dina to her bedroom; Billy says, “Poor Dina” and Phyllis says, “Poor Jack!”

Nikki arrives at Victoria’s office, offering to help her. Victoria orders Nikki to “leave me the hell alone!” When Victoria angrily unloads on her mother, Nikki apologizes for revealing the things she did to Nate (Brooks Donnell).

Victoria admits she is already seeking help, seeing her therapist but Nikki fears the appointments are not helping. Victoria tells her that the sessions leave her “raw” and quickly grabs her bag, rushing off to her therapy appointment.

Jack returns downstairs, having no interest in what is going on between Ashley and Billy; both Billy and Phyllis give Jack sympathy for what he is coping with. He didn’t realize how much Dina’s mental state has deteriorated until Phyllis says how much she has seen her decline in the past few months.

Ashley meets her daughter, Abby at the coffeehouse. Abby tells her about Victoria’s confusing behavior and when she reveals that Summer didn’t show up for the bridal shower conversation; Ashley tells Abby how something must be happening because Phyllis and Billy moved into the Abbott mansion earlier.

Abby vows to see if there is anything she can learn while they all live under the same roof. Their conversation is cut short, when Jack texts Ashley to meet him urgently.

Mariah spots Kyle at the Dive Bar and wonders where his sidekick, Summer is. He says she is on holidays. He is pleased to hear how invested she has become in Sharon and Nick’s (Joshua Morrow) wedding, as the project is keeping her focused. He says his PI is searching for Tessa (Cait Fairbanks) and encourages Mariah to trust her instincts and not give up on Tessa, even though Sharon has her doubts.

Jack and Ashley meet at GCAC, where he admits he just realized how far downhill their mother has gone and they are too close to see it. Ashley feels the same as Jack, that even though they knew it was coming, they didn’t see it happening this fast. Jack reveals he wants to restart his investigation in finding his biological father. Ashley advises against it, seeing how hurt he was when he learned Philip Chancellor wasn’t his dad; but Jack is determined.

At the Abbott house, Phyllis confesses it is strange living in a house that used to be hers and all the horrible memories, including the day Jack threw her out for sleeping with Billy, while married to him. Billy is concerned but Phyllis promises she will always have complete honesty with him about their living arrangements.

Ashley vents to Kyle about Billy and Phyllis as Kyle reveals he has things she will want to hear. He first tells her about Phyllis sending Summer out on the cruise for what she did but Phyllis feels Billy would never do anything with Summer to jeopardize his relationship with Phyllis, nor his CEO position.

Kyle then reveals how Billy lost the company boat in a poker game to a woman named Sinead, and the only reason they have it back is because he won money enough to buy it back.

Ashley feels they need actual proof of this but Kyle suggests this can’t be the only incident because Billy is a risk taker and if he can get away with things; he will continue. Ashley thinks they will have to wait until Billy screws up, but Kyle suggests they don’t wait; as they can make it happen!

Nikki wakes up Victoria, who was sound asleep in her own bed. Victoria isn’t please with the intrusion but Nikki doesn’t care. She wants to know the entire truth from Victoria and orders her to stop lying, refusing to leave until she knows it all. Victoria admits she isn’t seeing her therapist and hasn’t in months.

Nikki tells her she cannot keep this all inside but Victoria doesn’t feel she has any other option, as she can’t gamble with their lives, telling a virtual stranger the truth. She feels trapped, admitting this is far worse than being with JT, the monster.

Billy and Phyllis are sharing an intimate moment on the couch, when Abby strolls in taunting them about running out of places to “make out”. She tells them there will be no skinny dipping in the pool and leaves. Billy suddenly agrees with Ashley, feeling the Abbott mansion is too small.

When Kyle explains about setting up Billy for a card game, Ashley fears dragging him back into that shady world and crossing the line. Kyle questions how far she is truly willing to go to regain control of Jabot, her father’s company. She doesn’t say anything, so Kyle says if she can come up with a better plan, he will support it.