The Young and the Restless Spoilers: Tuesday, October 16 – Billy Gets a Warning from Kyle – Abby Blasts Ashley for Her Betrayal 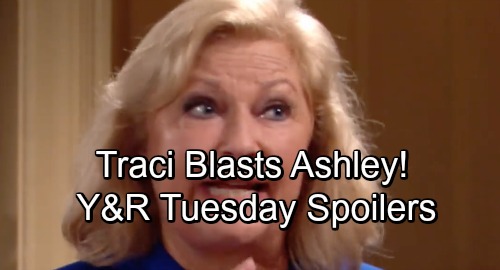 The Young and the Restless (Y&R) spoilers for Tuesday, October 16, tease that Billy (Jason Thompson) will return to Genoa City with big plans. He’ll wrap up his short rehab stint and make his way back to Jabot for a fresh start. Billy will hope he can reclaim some power eventually, but that pursuit will have to wait. Some huge messes will need Billy’s attention right off the bat.

For starters, there’s a fallout of Ashley’s (Eileen Davidson) scheme. She duped Jack (Peter Bergman) into thinking he wasn’t a blood Abbott, so that wound won’t heal anytime soon. Billy will definitely get caught up in his family’s drama, but there’ll be another crisis to tackle. We can’t forget that Billy made a mess of his own before he kicked off his rehab stint.

Billy had sex with Summer (Hunter King) and now she thinks they’re poised to have a real relationship. Kyle (Michael Mealor) knows that’s not going to happen, so he’ll confront Billy and try to protect his ex. Deep down, Kyle will always care about Summer’s well-being. Even when he’s angry with her, Kyle wants to watch out for Summer on some level.

The Young and the Restless spoilers say Kyle will push Billy to be gentle. He’ll insist that Summer needs to hear the truth, but Billy should be nice about it. Billy will promise to do his best, but his plan will go awry later this week! In the meantime, Ashley will face more backlash. Abby (Melissa Ordway) will feel used and abused thanks to her inadvertent role in Ashley’s plot.

Ashley had to deceive Abby with the bogus DNA test results. She lied to her daughter’s face and even let her feed Dina’s (Marla Adams) fake affair delusions. Y&R fans can expect Abby to rip into Ashley and wonder how he could do this to Jack. It’s going to be a while before any of the Abbotts can forgive Ashley for her lies.

Other Young and the Restless spoilers say Victoria (Amelia Heinle) will have to pick a side. The cover-up crew will be divided over how to handle their blackmailer. On Monday, the gang decides to hold off on making a payment. That should bring another round of chaos when the blackmailer revs up his or her threats.

It looks like Tuesday’s episode will bring an email with a picture of J.T.’s (Thad Luckinbill) burial site. Will that convince Victoria that they have to pay up? Phyllis (Gina Tognoni) will probably still be hesitant to fork over the cash. Nikki (Melody Thomas Scott) and Sharon (Sharon Case) may be easier to persuade!