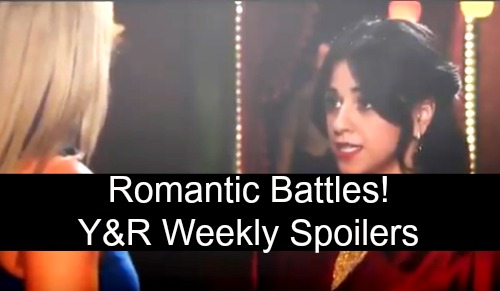 The Young and the Restless (Y&R) spoilers for the week of November 12-16 tease that some excitement’s ahead in Genoa City. For starters, let’s talk about the Rosales family. These three siblings will be awfully busy over the next few episodes. Lola (Sasha Calle) will score a sweet catering gig, so she’ll have a lot on her plate as she gears up for the Jaboutique launch party.

Arturo (Jason Canela) will also continue to dance around the truth, but a shocking secret about his past will finally be revealed to Abby (Melissa Ordway). Could that have something to do with Mia’s (Noemi Gonzalez), Rey’s (Jordi Vilasuso) estranged wife? She’ll show up in GC this week to make waves for her husband. If Mia’s also been involved with Arturo, that’ll certainly add to the drama.

The Young and the Restless spoilers say Rey and Sharon’s (Sharon Case) chemistry will finally explode, so they’ll lock lips at last. Mia won’t be pleased when she sees the apparent “Shey” spark. She’ll put Sharon on notice and take steps toward repairing her marriage. It won’t be as easy as Mia hopes!

Next, we should get back to that launch party we mentioned. Phyllis (Gina Tognoni) will infuriate Billy (Jason Thompson) by taking all the credit for his pet project. He was all about those Jaboutiques, so he’ll be livid as she hogs the limelight. Phyllis will pour salt in the wound by flaunting Nick as her plus one, but two can play that game. Billy will convince Sharon to join him as his stunning date.

Y&R fans can expect a battle of the exes as well as some bonding. Will Sharon and Billy stick to friendship or could this turn into something else? Regardless, Sharon’s feelings for Rey aren’t going away anytime soon.

Other Young and the Restless spoilers say Mariah’s (Camryn Grimes) plan will backfire. She’ll buy a new mattress for Tessa’s (Cait Fairbanks) studio and hope it’ll be a nice surprise. When Tessa learns hers has been swapped out, she’ll blow her top and leave the apartment in a rage.

Mariah will turn to Kyle (Michael Mealor) for advice, so he’ll listen up and weigh in. He’ll decide that maybe Tessa felt like it wasn’t fair of Mariah to make a unilateral decision. Back at home, Mariah will breathe a sigh of relief when she finds a letter of apology along with some wine. That relief will turn to suspicion once she steps outside and spots Tessa shoveling cash out of the discarded mattress.

Y&R spoilers say Mariah will set out to learn the real story, which will bring some startling revelations. Tessa’s got a secret, but it won’t be quite as explosive as everyone thinks. It sounds like we’re dealing with something that’ll make us somewhat sympathetic, not outraged.

Finally, Summer (Hunter King) will accept her feelings and make them known. She’ll go after Kyle romantically, but Lola may be a fiercer foe than she thought. We’ll give you updates as other Y&R news comes in. Stay tuned to the CBS soap and don’t forget to check CDL often for the latest Young and the Restless spoilers, updates and news.