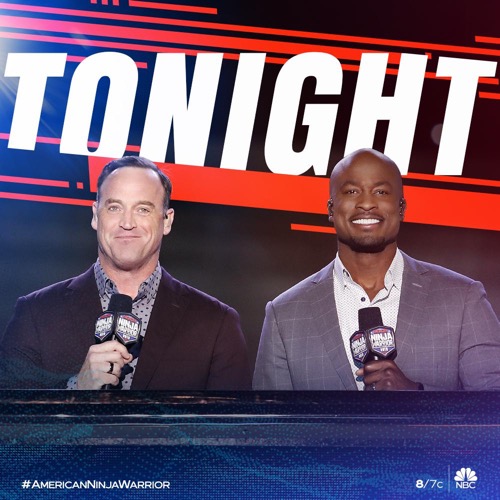 Oklahoma City celebrated their City Finals with some of the biggest names in American Ninja Warrior.

The City Finals meant there were four additional obstacles this time. This included the newest obstacle called the Snapback and the night itself won’t end until the Power Tower. The first Power Tower was about the Speed Pass and it allowed ninjas to go directly to the National Finals. The Second Power Tower, on the other hand, was about the Safety Pass. The Safety Pass allowed ninjas a second chance at Stage 4 and some have been successful at attaining while others have not. It really was all done to the ninjas. But first things first, they had to make it through the course. The first ninja up was Jeff Harris. He was known as the Waste Warrier because of his advocacy for recycling and he was rooking a seventies look just for kicks. He also went on to have an amazing night.

Jeff found new techniques to make it through the first half of the course. He also made it up to the Warped Wall with no problems whatsoever and so the real challenge for him was the second half of the course. He tried to make it through, but unfortunately, he fell long before he made it to the Climb and for that he lost his chances at the Power Tower. The next ninja, however, was Maggi Thorne. She was the Pink Bow Ninja because she wears her signature pink bow every time she makes her run and, when she wasn’t being tough while wearing pink, she was also a mother to three. Her kids were there to cheer her on tonight and they like everyone had hoped she would overcome her curse. Maggie was cursed to never make it past the fifth obstacle.

Maggi kept trying, though. Her motto was “never giving up” and she tried to live up to it every day. Only this time she should the fruits of her labor. She finally made it passed the fifth obstacle and she also made it up to the Warped Wall on her first try. It was her first time doing so and that alone was an achievement. Maggi had the best of her career. It ended on the eighth obstacle, but it was still a great run and it set the bar high for the women. Many ninjas had tried after her to make it past the Crazy Clocks and none did over the commercial break. The next best hope of it was Rick Hinnant. He and his wife turned tragedy and heartache into hope. They created a business not long after they lost their daughter and today they’ve now sold over a million items.

It has created a bright future for his family and tonight Rick wanted to have another personal achievement. Sadly, his run came to a premature end when he again fell on the Coconut Climb. Next up was Karsten Williams. He hasn’t hit a buzzer since the sixth season and he wanted to change that tonight. He was another one that had no trouble with the first half of the course and he became the first to make it past the Crazy Clocks. The newest obstacle also couldn’t stop him and so he really did turnaround his luck. He made it up to the Climb and was the first finisher of the night. Its been five years for him and so this truly was a great moment in ANW history. The Big Cat is back! His mother was also back because she never gave up and she remains his coach as well as his biggest fan.

Taylor Amann went next. She was a pole-vaulter and she says it translates really well for the obstacle course. So she had tonight to back up her statement. Taylor preserved through the first half and she became the first female rookie to make it to back of the course in the last three years. She ended up falling on the Crazy Clocks, but her speed was what saved her. She moved to the top spot among the women by being faster than Maggi and so the women were really bringing it this year. Up Next was David Wright. He was quickly making a name for himself as the cake ninja and he says eating cake is what gives him that extra boost. David also made people laugh and he was shaping up to be a great ninja.

David went on to speed through the course. He made it through the first half with no problem and the second half didn’t even seem to faze him. David eventually became the second finisher of the night and was the first rookie this season to hit two buzzers. Guess, there really was something to eating cake every day! Next up was Karen Wilton. This was her second year with ANW and her second time making it to the City Finals. She fell on the first obstacle last year, but she wanted to show her daughters how to keep fighting and so she came back hoping to make up for what happened last time. She later made it through the dreaded first obstacle and she conquered her first Warped Wall. And sadly her night came to an end on the Salmon Ladder.

The second half of the course wasn’t easy. In fact, it was designed to be as tricky and it trips up short people. Hence Karen’s untimely exit. Chris Cambre also had a run this year. He was known for wearing his shrimping boots on the course and those boots weren’t enough to save him on the Salmon Ladder. Then there was Jody Avila. He had the best run of his career as he sailed through the course and went on to become the third finisher of the night. It was his first buzzer with the City Finals and his speed put him in the running for the Power Tower. The Big Dog and the Big Cat were both having great seasons this year. And before anyone knew it, it was Barclay Stockett’s turn and she didn’t just want to have an impressive run tonight.

Barclay also wanted to highlight her charity. She built obstacles courses in Africa for children there and it went towards helping children rehabilitate after being child soldiers. Barclay wanted the kids to be kids again and so highlighting her charity would hopefully get the message out there. It also didn’t hurt that she reminded everyone of her hard work the longer she remained on the course. Barclay had an impressive because she really is a phenomenon. She made it past the Coconut Climb which took her out in Qualifiers and she cemented her place in the National Final the moment she touched the Crazy Clocks. The rest of it didn’t matter. Like sure she fell on the Crazy Clocks, but she was the third woman to make it up to the Warped Wall and her speed put her in the lead.

Next Up was Matthew Day. He was also another fast ninja and he lost out to Daniel Gil on the Power Tower and he desperately wanted a rematch, but unfortunately, he fell on the Coconut Climb and so maybe speed isn’t everything. Not when being cautious has its advantages. Up next was Daniel Gil and he was also a speed ninja. He wanted a trifecta with the Mega Warped Wall, Speed Pass, and Safety pass and so there was no being cautious for him. Daniel raced through the course and that caused an accident when he slammed his head into an obstacle, but he kept going. He speeds through the second half of the course and finished the night with the fastest time by a minute. He was in the running to go up against Karsten and so the final run depended on how “the Kid” does.

Mathis “The Kid” Owhadi was a breakout star last season. That was when the age limit was lowered to nineteen and he was actually only nineteen-year old that made it to the National Finals. He wanted to make the trip again and he also wanted his chance at the Safety Pass. The Kid raced through the course like his mentor Daniel Gil taught him and he was lucky enough not to hit his face. He also made the Climb up to the buzzer and was able to hit it in time. The Kid was half a second ahead yet his impressive run meant he would be racing against his mentor up the Power Tower.

Mathis had the energy, but Daniel had the experience.

They trained together as well ad so they each knew the other’s weakness.

It all came down to the race and the whole way up it was neck and neck.

Then Mathis’s long arms gave him the added advantage and thanks to those arms he went on to win the Safety Pass.

Daniel could have gotten upset with the results, but he was too proud of his protégé to let anyone take away from the Kid’s impressive finish.