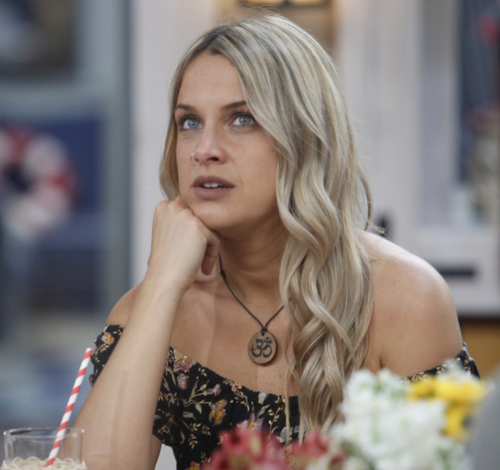 Tonight on CBS Big Brother US 2019 airs with an all-new Wednesday, June 30, 2019, episode and we have your Big Brother 21 recap below! On tonight’s Big Brother season 21 episode 3 “Nominations,” as per the CBS synopsis, “Christie Murphy is the new HoH and Christie will have to nominate two houseguests to go up on the block.”

So make sure to visit Celeb Dirty Laundry for our Big Brother 21 recap between 8 PM and 9 PM ET.  While you wait for our recap make sure to check out all our BB21 recaps, videos, news, spoilers & more, right here!

Ovi is making sure that Christie can count on him, he thinks it will secure his place in the house. He tells her that he is at her beck and call. Kathryn is not happy how she did in the HoH competition and thinks she may be the skape goat and be put on the block. Kemi says she think Jack is a dumbass. Kat says she deosn’t trust Jack and its 90% sure he would do what she told him to if he was the HoH. In the HoH room, Christie, Kemi and others talk about Kat and how she is delusional that she can direct someone to do what she wants.

Nick is in an alliance with Michie, Jack, Holly, Christie, and Bella. But, if they could get eight,it would be even better for his game. Jack loves Tommy’s game play, and tries to get him in his alliance. Tommy says eight is his lucky number. Tommy thinks they are both in synch. Analyse is added to the alliance and she is thrilled.

Christie is super excited, an eight-person alliance can really take control of the house.

Christie tells Cliff that she wants to put up Kat against him, but it is a guarantee that she will go because she is paranoid. Cliff is not dumb, he knows that Christie is not asking him, but he has to trust her. Cliff is deifintely her pawn, but she needs to make Kat think she is the pawn.

Ovi is in his bed and he hears Nick and Tommy talking game and a final eight alliance. Ovi goes to Analyse about the group of eight, and she knows that she has to defuse the situtation, since she is part of the final eight. Analyse goes to Christie, Jack and Michie , and tells them what Ovi overheard. Michie is furious and they all know that they have to do some major damage control.

The houseguests gather in the living room and see on the screen, Whacktivity Comp. They head in the back yard and see these three Whacktivity signs; chaos, panick and nightmare; none of these even sound good. Only five house guests will play each week and the winner will win a secret power. Analyse is up first. It’s time to find out thwne their Whaktivity will take place. Kat, Bella, Nicole, Cliff and Ovi will participate in the first Whaktivity called Nightmare. The houseguests have to get dressed because they are playing right now. There are three trash cans in front of them and they have to identify the correct smell in each. The first person to identity each smell correctly will win a secret power in the house.

Ovi has won the competition, he guessed Bobcat Urine, Rotted FIsh and Impure Durian. Ovi has no idea what the secret power is, but he is thrilled. Ovi is very quiet, he doesn’t want anyone to know it is him. Ovi gets his power; this power gives him the ability to turn one HOH’s reign into a nightmare. After the nomination ceremony, when everyone is asleep, he can make them wake up, have a new nominiation ceremony and name two new nominees. The original nominees will be safe and nobody will know it was him that did it. This power is good for the first six nominations of the game. Ovi is definitely going to keep this power a secret.

Ovi has it in his mind that he can create a strong alliance. He calls in Jack, Michie, Christie, and Analyse. Little does poor Ovi know, the people he is aligning with are in the eight-person alliance that he head about it.

Kemi goes in to see Christie, she just wants to know where her head it with the nominations coming, Jack is there too.

Time for the nomination ceremony. The first person nominated is Cliff and Kat. Christie stresses that this is not personal and unbiased.