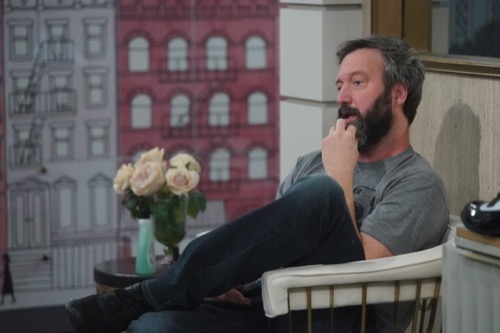 Kato is out and Tom is back. He cannot believe he is in the house. He needs to make some friends, some moves and win HOH. It is down to 7 people. Kandi plans to get Tom on her side so they can take out one of the big dogs. Meanwhile, Ricky and Lolo talk. They think Tom needs to go next.

Kandi wakes Tom and asks him who he is going to vote out if he is HOH. He doesn’t know. Kandi tells him he needs to get rid of one of the athletes. He agrees. He thinks to himself that she may be working both sides but he isn’t t sure.

The group gets brought out to the yard for HOH. They arrive to see a mini casino set up. Omarosa is there. She will be running the competition, Celebrity Tumbling Dice. She tells Tamar she is not eligible to compete. The celebs must get into large dice and move them on the life-size board to the number they are given. Tom wins the first round. Dina is selected next to go up against Natalie, who wins. Dina had a hard time. Kandi goes next. She chooses to battle against Natalie. Lolo is annoyed. She knows Kandi is trying to fight them. Natalie wins. Now it is down to Tom and Natalie. Tom wins! He is HOH. Natalie, Lolo, Tamar, and Ricky are upset and nervous.

Tom meets up with Dina and Kandi separately and quickly so the others don’t see. The three are tougher and want to get rid of Lolo and Natalie. Meanwhile, Lolo and Natalie know where Kandi stands and she is dead to them.

Dina confides in Kandi about a mystery guy she has been talking to on the phone that she hasn’t met. She says she is going to marry him. Tamar comes in. She tells Dina she may be getting catfished. Dina tells them no way.

While everyone sleeps, Tom is in the kitchen with cereal boxes in hand. He is acting like a bird. Swooping around.

Natalie gives Kandi the cold shoulder. Tamar tells her they saved her. Kandi tells her she saved her not them. Kandi meets with Tom. She thinks he needs to put Ricky and Natalie on the block at the same time. She tells them then they cannot save each other. He thinks about it and admits he may have screwed up the plan. He should have talked to her first.

It is time. Tom calls everyone together. He nominates Ricky and Natalie.