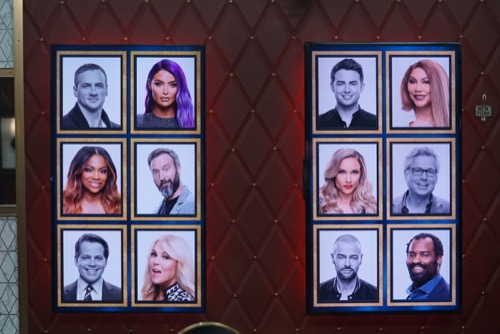 Tonight is double eviction night and there will be more twist and turns. After the Nomination Ceremony, Natalie and Ricky are not thrilled, they both think it sucks that they are put up together. Lolo thought she was going to be put up, so she is glad she is not nominated but is worried that maybe his plan is to back door her. Kandi is thrilled that Tom listened to her, she tells him to just be cool now.

Lolo, Natalie, and Ricky are talking game, they need to win the Veto and convince Tom to put up Dina.

Dina is playing pool with Tom, Kandi walks up and announces that they have to win the Veto. Kandi joins in on the game of pool. The three of them are on the same page.

Julie greets the houseguests and announces that since the finale is five days away, tonight is double eviction night. By the end of the night, two people will be evicted.

Time for the POV Competition. Lolo has such a bad attitude about being the host. Everyone dresses like Charlie Chaplin and they are in an old movie set. The houseguests will be shown a sequence of colors, they will be asked to name a specific color in the sequence. The person who beats out everyone else with the correct answers will win the POV. When they get the wrong answer, they are blasted full body with colored paint. In the end, Tom wins the POV.

Tom tells Kandi he is thinking of using the POV to guarantee that he gets rid of Ricky. Kandi is not happy with it, but he says he knows what he is doing and this is best for his game. He says he is going to put Tamar up, that will guarantee that Ricky goes home. Kandi is against it, she still cares about Tamar.

Kandi runs to Tamar and tells her what Tom wants to do. Kandi explains that it is because he wants Ricky out so bad, it has nothing to do with her. Tamar tries to act like idoesn’t;t bother her.

Tamar goes to speak to Tom and confronts him on wanting to put her up. She tells him to stop threatening people. He reminds her that it is just a game. She says he is not going to take food out of her babies mouth. Tom tells her to stop using words like threatening and bullying, it is just a game.

Time for the Veto meeting, Kandi doesn’t know what Tom is going to do, but she does know that if he puts of Tamar all hell is going to break loose.

Tom announces that he has the power to Veto the nominations. Both give a speech on why he should use the Veto on them. Tom gives the Veto to Ricky, takes him off the block, then replaces him with Lolo. Tamar is shocked, Kandi is fighting back the tears. Natalie looks furious. Obviously, this is an unexpected move. Tom feels like he extended an olive branch to Ricky and it could shift the house.

Tamar goes to chat with Kandi who says she is shocked, Tamar is elated. Kandi can’t figure out Tom’s strategy but she is thrilled that Natalie is still on the block. Not much time to talk and it’s time for the live vote after a brief statement.

Kandi is the first to vote, she votes to evict Natalie. Tamar for Natalie. Ricky for Natalie. Dina for Natalie. All of the votes are in, with a vote of four to zero, Natalie is evicted from the Big Brother house.

Julie calls everyone to the living room. Kevin Fraser announces that one of the houseguests will be safe tonight, they will all compete in a safety competition but will have to sit out of the HoH competition if they win.

Natalie is with Julie, she tells her that she hopes one of her three wins. Natalie says that she backed away from Tom early in the game because she felt she could trust Ricky more.

Time for the Safety Competition. This one is called Living Art. Inside the house, there are real people dressed as living art and are spread out on the lower level. The houseguest has to go through the house and count how many people are there and they only have 90 seconds. Everyone has locked in their answers, Tamar is the winner.

Time for the HoH competition. This one is also about Living Art. Some have disappeared, the houseguests have to figure how many how many of left and they have 90 seconds again. The winner of this very important HoH is Lolo and she only has a few minutes to strategize.

The Veto competition begins, it is called Cousins starring Big Brother alums. After watching a video of Metta and Ross. Julie asks various questions and the person who answered the most will win the competition. Tamar wins the competition.

Time for the Veto competition. Tamar decides not to use the POV. The nominations will remain in place.

Tom and Kandi say some final words. Time for the live vote. Dina votes first and votes to evict Tom. Ricky votes for Tom. Tamar votes for Tom. All of the votes are in. With a vote of three to zero, Tom is evicted from the Big Brother house.

Tamar doesn’t hide her excitement that Tom is eliminated and it’s very annoying. Does she realize this is a game?

Tom is with Julie, he tells her that he is rooting for Lolo. Tom says that after Kato left it was downhill. Julie asks him why he targeted the men, Tom says that he is not sure if he would do that again, now knowing how the game played out. Tom says the best thing he is taking away from this is the house is the way people behave. One day someone is your best friend, the next day your enemy.

Julie speaks to the houseguests and tells them how next Wednesday is going to play out during the live finale.