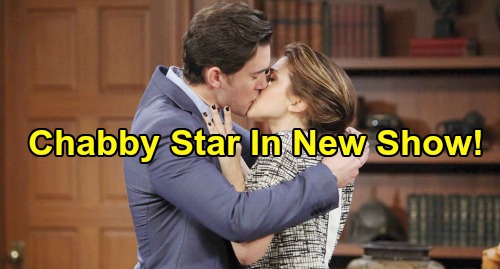 Days of Our Lives (DOOL) spoilers reveal that the NBC soap is trying something new – and it should bring plenty of excitement for “Chabby” fans. You’ve probably heard about the DOOL app by now. It features lots of behind-the-scenes interviews and exclusive content, so it’s worth checking out. In fact, there’ll soon be one more reason to check it out thanks to an interesting addition.

They’re releasing Days of Our Lives: The Digital Series, which will premiere on the DOOL app starting Thursday, August 1. The first season will bring an eight-episode arc that features Chad DiMera (Billy Flynn) and Abigail DiMera (Kate Mansi) in Paris. Although Chad and Abby are headed back to the main show this fall, this will provide a little glimpse into their current life away from Salem.

The first three episodes will drop right away, but the rest will come on a weekly basis. If you’d prefer to watch this show on the NBC app or NBC.com, don’t worry! It’ll still pop up in those places. DOOL app users just get first dibs since it’ll appear there a full week before it streams anywhere else.

Of course, you might be wondering if you have time to squeeze another show into your schedule. The answer is: You probably do! These episodes will just be mini stories since each one is only about six to 10 minutes in length. That sounds pretty perfect in today’s fast-paced world, especially since this is sort of a fun experiment for DOOL.

Days of Our Lives is the first daytime drama to add an original digital series that complements the main soap. Everyone will be watching to see how this goes – including the other daytime dramas. If Days has a lot of success and scores buzz from this, perhaps General Hospital, The Young and the Restless, and The Bold and the Beautiful might follow suit.

This is a great opportunity for Days to expand into new territory and evolve. People are changing how they watch TV, so it’s a good idea to capitalize on that and possibly secure a path for the uncertain future. We all hope Days sticks around for as long as possible, but it never hurts to plan ahead and focus on other strategies.

As for the first season of this streaming series, DOOL fans can expect another familiar face to make an appearance. Days of Our Lives spoilers say Austin Reed (Austin Peck) will show up in Paris, so that should be a nice blast from the past. A new character named Juliet (Rachele Schank) will also make her debut, so we’ll find out who she is and how she’ll fit in with “Chabby.”

What do you think about this Days of Our Lives: The Digital Series? Are you interested in seeing Chad and Abigail in Paris? We’ll give you updates as other Days news comes in. Stay tuned to DOOL and don’t forget to check CDL often for the latest Days of Our Lives spoilers, updates and news.