Days of Our Lives Spoilers: Jack Demands Divorce – Catches Eve After She Doses Him With Fake Memory Serum

BY hellodrdavis on July 21, 2019 | Comments: one comment
Related : Days of Our Lives, Soap Opera, Spoiler, Television 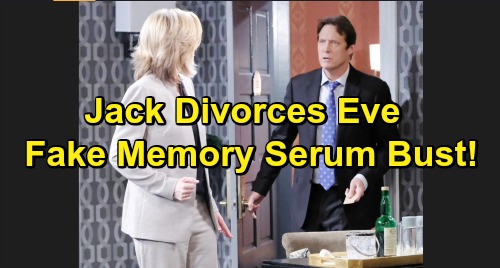 Days of Our Lives (DOOL) spoilers tease that Jack Deveraux (Matthew Ashford) will get a big shock. Right now, he’s blissfully married to Eve Deveraux (Kassie DePaiva) and he’s reassured her that nothing will change in their relationship after he takes Dr. Wilhelm Rolf’s (William Utay) memory serum. But Eve doesn’t believe that things will stay the same if Jack gets his hands on the serum – she’s worried that after he remembers his life, he’ll go back to his ex, Jennifer Horton (Melissa Reeves).

And so that will lead Eve to do something very devious. She absolutely doesn’t want Jack to take the serum, but after it’s clear that he’s going to take it without her blessing, she’ll go to extreme lengths to prevent the serum from doing its job and she’ll seriously betray Jack in the process.

Here’s how it’s going to go down. Eve will enlist the help of Xander Kiriakis (Paul Telfer) and somehow switch out Jack’s serum with a phony version of the serum…that is, a placebo that has no memory-inducing effect! But she’ll lead Jack to believe that she’s come around and decided to support him in his memory retrieval efforts.

In fact, Eve will even be the one who injects Jack with the serum, only it will be a fake serum. She’ll somehow get Xander to intercept the real serum after it leaves the lab, and she’ll gain possession of it. Then she’ll dose Jack with the fake serum, leading him to believe that she’s on his side.

But according to DOOL spoilers, it won’t be long before Jack realizes what’s happened. Exactly how he finds out about Eve’s big serum switch remains to be seen, but he’ll discover her betrayal, and he’ll be peeved. That will lead to a huge blowup between himself and Eve.

Eve will certainly have some explaining to do, as she tries to get Jack to see that she only did what she did in order to protect their marriage and prevent Jennifer from ruining his life again. But it doesn’t look like Jack’s going to be amused by Eve’s actions, and he certainly won’t be persuaded by her excuses for her actions.

According to DOOL spoilers, Jack will promptly let Eve know that he’s divorcing her, and the two of them will get into a major argument, as well as a physical altercation. It sure doesn’t look like Eve is going to be able to walk away from her actions unscathed, as Jack will be furious.

Of course, whether Jack will be able to get his hands on the serum will be another matter entirely. He seems bound and determined to take the serum, so maybe he’ll enlist the help of Jennifer with that endeavor if he can’t get the real serum back from Eve.

Do you think that Jack will ever regain his memories and reunite with Jennifer? Stay tuned to DOOL and don’t forget to check CDL often for the latest Days of Our Lives spoilers, updates, and news.