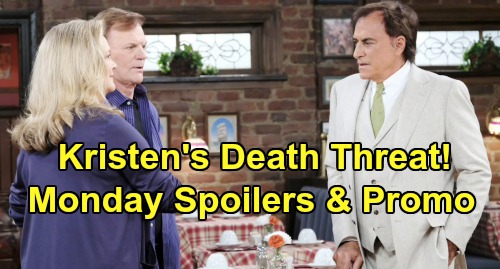 Days of Our Lives (DOOL) spoilers for Monday, August 12, tease that John Black (Drake Hogestyn) will have a special surprise for Marlena Evans (Deidre Hall). He just won’t know she’s got the exact same thing in mind. John and Marlena’s anniversary is coming up, so they’ll kick off separate surprise party plans. The people on their guest lists should battle some confusion soon enough!

Until then, Roman Brady (Josh Taylor) and Kate Roberts (Lauren Koslow) will drop a bomb on Anna DiMera (Leann Hunley). She’ll insist she’s back in town for a final goodbye. Anna will be prepared to let go of Tony DiMera (Thaao Penghlis) by placing his ashes in the DiMera mausoleum. She’s about to get a huge shock instead.

Kate and Roman will realize Anna’s out of the loop on Tony’s survival…and his new marriage. Days of Our Lives spoilers say Anna will fume once she gets updates. She’ll wonder why Tony would marry “Nicole Walker” (Arianne Zucker) instead of seeking out his true love. Anna may feel like she’s been pining for no reason all this time.

Of course, DOOL viewers know Tony’s eager to reunite with Anna. He’s just stuck in Kristen DiMera’s (Stacy Haiduk) scheme right now. Tony will back down on his divorce demand after Kristen threatens Anna’s life, but that won’t be Kristen’s only problem. Chloe Lane (Nadia Bjorlin) will also be concerned about “Nicole” on Monday. She’ll encourage Marlena to track “Nicole” down and talk her into a session.

Marlena will agree to give it a shot, but that’s only going to bring “Nicole’s” outburst when Tuesday rolls around. As for Tony, he’ll be taken aback when he sees Anna’s face again for the first time in years. Days of Our Lives spoilers say Monday’s episode will deliver a powerful moment. Anna’s rage should quickly derail it, but there’ll be plenty of lingering love under the surface.

It sounds like some great scenes are on coming up. DOOL fans won’t want to miss all the excitement in Salem. We’ll keep you posted as other Days news emerges. Stay tuned to the NBC soap and don’t forget to check CDL often for the latest Days of Our Lives spoilers, updates and news.