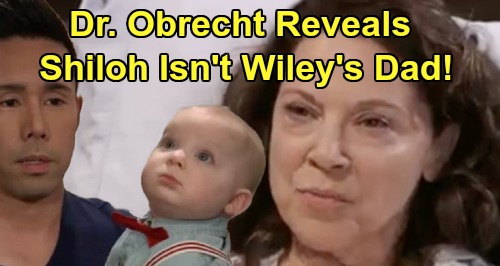 And then there’s the Wiley Cooper-Jones secret. Liesl knows that the baby currently known as Wiley is actually Nelle Benson (Chloe Lanier) and Michael Corinthos’ (Chad Duell) son Jonah Corinthos. Until recently, Liesl seemed content to keep the big secret for Nelle and let everyone go on thinking that Jonah is Wiley. But it seems that deep down, Liesl might be feeling guilty about keeping the baby swap secret.

After all, when Liesl was on The Haunted Star for Franco Baldwin (Roger Howarth) and Elizabeth Baldwin’s (Rebecca Herbst) wedding celebration, she nearly spilled the details about Wiley to Franco. She imbibed too much and got a bit loose-lipped with some details. Fortunately for her, she didn’t spill enough details to lead Franco to put everything together, but his interest is definitely piqued.

Chances are, Franco won’t let the matter drop, and it looks like Liesl may start feeling guiltier and guiltier about keeping a lid on what she knows. Liesl can be ruthless, but she’s also got a soft side, and it seems to really pain her to think about “Wiley’s” real father being led to believe that his baby is dead. And so this will lead to an interesting conversation with Nina this week.

In the new GH promo for the week of July 15, Liesl is shown talking with Nina from her hospital bed. It looks like Liesl will mention something about Wiley, and Nina will chime in about how Wiley’s father is actually Shiloh Archer (Coby Ryan McLaughlin). Of course, General Hospital viewers know that Shiloh was the original Wiley’s father – that is, the Wiley who died of Sudden Infant Death Syndrome while in Brad Cooper’s (Parry Shen) care.

Since Nina and everyone else are under the impression that Shiloh is the biological father of the baby that Brad and Lucas Jones (Ryan Carnes) now have in their possession, she’ll think that Liesl is referring to Shiloh when she refers to “the baby’s father,” and she’s shown in the promo telling Liesl that “the father of that baby is Shiloh.”

But then Liesl will respond to a stunned Nina by cryptically saying, “What if, perhaps, he isn’t?” Might Liesl actually confide in Nina about who the baby’s true biological parents are? Nina would actually be a strange person for Liesl to blurt out the secret to, especially since Liesl is also keeping another secret from Nina about the true identity of her “daughter” Sasha!

Well, chances are, Liesl will cover her tracks pretty quickly and walk back her comments with Liesl-like flair. But at some point the baby swap story is going to have to come to an end, and it seems that Liesl would be the perfect person to bring out the truth.

Do you think that Liesl will be the one who’s ultimately responsible for reuniting Michael with his son? Stay tuned to the ABC soap and don’t forget to check CDL often for the latest General Hospital spoilers, updates, and news.