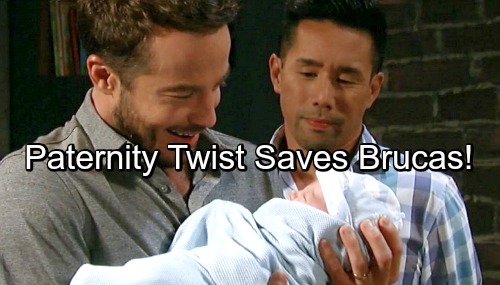 General Hospital (GH) spoilers tease that Lucas (Ryan Carnes) and Brad’s (Parry Shen) relationship will take a serious hit. Although Lucas doesn’t know it yet, Brad’s keeping a huge secret from him. His deception alone should be an issue, but this is far worse than just a fib between the two of them. Brad’s telling a lie that affects several characters, so the blowup’s bound to be extreme.

Lucas always had a bad feeling about Brad and Nelle’s (Chloe Lanier) friendship. His suspicions were obviously correct. Nelle schemed until the very end, so she handed over her newborn baby in exchange for Brad’s dead one. She just couldn’t handle the thought of the Corinthos clan having control of her child. Nelle would much rather see Michael (Chad Duell) and his family suffer!

General Hospital spoilers say the birth mom will want her child back soon, so that’ll set the next phase of all this in motion. Brad will confess to Julian (William deVry), which will be something else for Lucas to be angry about later. Lucas recently talked to Sam (Kelly Monaco) about his rough patch with Brad. He assured her that they got through it, but another round of drama is clearly looming.

The birth mom probably won’t take the baby back after all, but that doesn’t mean Brad’s off the hook. This GH storyline will come with several twists and turns, but there’s one aspect of the plot that’s unavoidable. Lucas will eventually learn the truth about Brad’s actions, so you can bet that’ll bring some explosive scenes. Sooner or later, Brad’s lies will be exposed and Lucas will completely lose it!

Lucas may fear that Brad’s destroyed their chance at a family. Thanks to Brad’s shady behavior, they may no longer be considered adoption candidates. Lucas may think “Wiley’s” going to be ripped from their lives with no replacement kid in sight. On top of that, Lucas should be furious that Brad let him bond with this baby. He’ll be devastated if he has to hand Jonah over to Michael.

However, there’s still hope for “Brucas.” The inevitable secret explosion could lead to a temporary split, but a shocker could change the game. General Hospital spoilers hint that Michael may not be destined for fatherhood just yet. He might decide to let Brad and Lucas adopt the baby after all.

Then again, we can’t even be sure this is really Michael’s son. That Nelle’s a tricky one! It’s possible she did a little paternity test tampering behind the scenes. If some medical issue arises or Lucas demands a DNA test out of disbelief, Michael could be eliminated as the biological father.

Nelle might’ve turned to a sperm bank out of desperation, so Jonah’s fate would be up to her. She thought of Brad as a pal and seemed to care at least a smidge about this kid. There’s no reason to think Nelle would change her mind about letting “Brucas” raise him.

Perhaps keeping “Wiley” will ultimately be what saves Lucas and Brad’s relationship. Are you rooting for this couple to survive the mayhem ahead? We’ll give you updates as other GH news comes in. Stay tuned to the ABC soap and don’t forget to check CDL often for the General Hospital spoilers, updates and news.