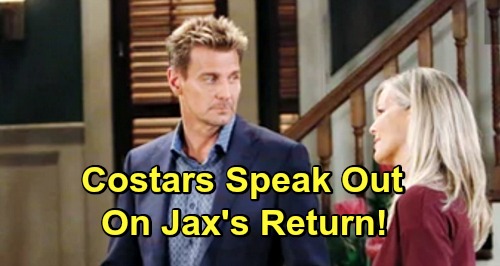 General Hospital (GH) spoilers tease that Jasper “Jax” Jacks’ return stint is rapidly approaching. EW confirms that Jax’s first airdate back will be May 7, so it won’t be long until he hits Port Charles once again. Jax will catch a flight into town and do his best to be there for his struggling daughter, Josslyn Jacks (Eden McCoy), as she deals with Oscar Nero’s (Garren Stitt) death.

Of course, Jax will want to support Carly Corinthos (Laura Wright) as well. She’ll have Sonny Corinthos (Maurice Benard) to lean on somewhat, but he’s awfully busy with the cult drama. Sonny had to make Kristina Corinthos-Davis (Lexi Ainsworth) his priority or he feared he’d lose her forever. He’ll keep working to bring Shiloh Archer (Coby Ryan McLaughlin) down, so Carly may lean on Jax a bit more.

Will that lead to a romantic reconnection as some point? Time will tell, but some GH fans certainly wouldn’t mind. Others would prefer Carly stick with Sonny, but the main thing is Jax will be around again. It’ll be nice to see him step up for Joss and be a present, supportive father. Since Jax has been off canvas for so long, he hasn’t really had the opportunity to do that in recent years.

General Hospital spoilers say Josslyn will appreciate her dad’s return, but she may have a hard time opening up. Losing Oscar will be devastating and difficult to work through. Joss will need a chance to process how she’s feeling and let her emotions play out naturally. She shouldn’t bottle anything up or try to hide, so let’s hope her family can make sure she doesn’t retreat into an unhealthy shell.

Are you eager to have Jax back in PC? What would you like to see during Jax’s return stint? We’ll give you updates as other GH news comes in. Stay tuned to the ABC soap and don’t forget to check CDL often for the latest General Hospital spoilers, updates and news.