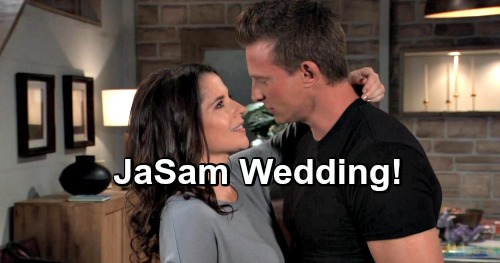 General Hospital (GH) spoilers tease that Jason Morgan (Steve Burton) and Sam McCall (Kelly Monaco) will continue to face obstacles. Sam’s currently wrapped up in her Shiloh Archer (Coby Ryan McLaughlin) scheme, which will inevitably bring more danger. Jason Morgan (Steve Burton) will secretly pitch in when he can. He’ll just have to squeeze it in when he’s not busy saving the rest of the world!

Ava Jerome (Maura West) and Carly Corinthos (Laura Wright) will both be saved from a grim fate thanks to Jason. He may end up helping Sonny Corinthos (Maurice Benard) soon, too. General Hospital spoilers say Sonny will run into trouble on his mission to find Dante Falconeri (Dominic Zamprogna). He may go missing just like his son, so Carly should be a mess.

Jason wouldn’t leave Sonny hanging, which means he could be the one to step up. Of course, Jason will also support Carly as she helps Josslyn Jacks (Eden McCoy) cope. Reality is finally sinking in for Joss. She understands that Oscar Nero (Garren Stitt) is fading fast, so it’s going to be tough on her to watch it happen. Once Josslyn actually loses Oscar, she’ll lean on Carly and that’ll leave Carly to lean on Jason.

Back with Sam, her worst fears will come true when Shiloh tightens his grip on Kristina Corinthos-Davis (Lexi Ainsworth). You can bet Jason will slide in for that rescue as well. It’s great that Jason always comes through for people who need him, but when will it be Jason’s turn for happiness? What about Sam? They deserve some bliss if they’re going to go through so much turmoil.

Jason and Sam can’t even have a real relationship right now. They’re being forced to sneak around and hide their love, so this is hopefully building to something better. General Hospital buzz suggests a “JaSam” wedding could happen down the road. Since they’re throwing so much at Sam and Jason, it makes sense for GH to be planning their nuptials. They’ll have to give fans some sort of payoff!

It sounds like everyone will just have to be patient. Things will never be drama-free for Jason and Sam, but maybe they’ll at least get a less stressful chapter. Would you like to see some joy for Jason and Sam? Should they wed eventually? We’ll give you updates as other GH news comes in. Stick with the ABC soap and don’t forget to check CDL often for the latest General Hospital spoilers, updates and news.