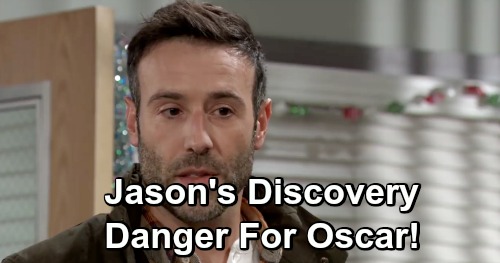 General Hospital (GH) spoilers tease that Jason Morgan (Steve Burton) won’t let go of his Shiloh (Coby Ryan McLaughlin) aka Hank concerns. He was suspicious of Hank from the get-go, but he’s even more concerned now that he’s seeing this Shiloh side of him. Since Kristina Corinthos-Davis (Lexi Ainsworth) is wrapped up in this, that gives Jason a good reason to stay focused and get answers.

Since Kristina is Sam McCall’s (Kelly Monaco) sister and Sonny Corinthos’ (Maurice Benard) daughter, Jason certainly wants to keep her safe. Shiloh can’t be trusted, so Jason will want to search deep within this guy’s past for the truth. It all goes back to Shiloh’s years as Hank and his link to Drew Cain (Billy Miller). That’s the key to cracking the case, so Jason won’t give up until he knows everything.

How will Jason get the info he’s searching for? Damian Spinelli (Bradford Anderson) might come in handy here. There must be some tidbits out there that Spinelli could uncover and report back with. Spin always comes through for Jason when it counts, so he’d be happy to help. Sam would certainly appreciate Spinelli’s efforts.

Of course, Jason could do some traveling as well. If he can follow Hank’s trail to Port Charles, he could retrace Hank’s steps and perhaps talk to some other people that knew him. It’d be particularly helpful if Jason could find an enemy or two. Shiloh hinted that he wasn’t always this positive (and phony) ray of sunshine. There are bound to be some people that Hank wronged in his younger days.

General Hospital spoilers say Jason will eventually make some shocking discoveries. Once he’s got a little more information, he’ll think it’s time to give Drew a warning. On January 17, Sam will be surprised – most likely by Jason’s findings. That same day, Jason will seek Drew out and fill him in on what he’s learned. He’ll warn Drew about the details he dug up, so Drew should be on edge.

After all, Oscar Nero (Garren Stitt) is living at this community house. Drew won’t want his son mixed up in something dangerous, but that seems to be where things are headed. GH fans can expect some crazy moments as this storyline heats up.