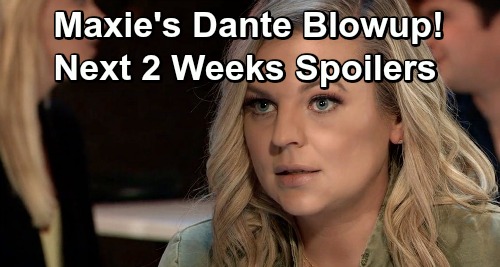 General Hospital (GH) spoilers for the next two weeks tease that the action’s about to heat up in Port Charles. During the week of June 10-14, Dr. Kim Nero (Tamara Braun) will need Drew Cain’s (Billy Miller) help. He’ll tend to her somehow, so it’s possible Kim will have a minor injury from their Mt. Kilimanjaro climb.

Then again, Drew may just offer more emotional support. Kim’s going to need plenty of it since she’ll find closure but not peace. Scattering Oscar Nero Quartermaine’s (Garren Stitt) ashes can’t heal Kim’s broken heart and neither can Drew, but he can at least be there for her. Meanwhile, Shiloh Archer (Coby Ryan McLaughlin) will slide out of trouble. Once he’s a free man, he’ll have a couple of crucial encounters.

The first one will involve a run-in with Sam McCall (Kelly Monaco). She’ll blast Shiloh before he heads on his merry way. Next, Kristina Corinthos-Davis (Lexi Ainsworth) will come face to face with her former leader. She’ll be rattled when Shiloh speaks to her, but she’ll try to stay strong. GH fans know Kristina was in a fragile place not too long ago, but she’s slowly gaining her strength and fire back.

Elsewhere, Josslyn Jacks (Eden McCoy) will need Lucy Coe’s (Lynn Herring) help with something. Will this be another strategy to remember Oscar or perhaps a project to distract herself? Whatever the case, Jasper “Jax” Jacks (Ingo Rademacher) will worry about his daughter. He’ll do his best to guide Jax down the path to healing, but she’ll face some setbacks as she goes along.

Other General Hospital spoilers say Willow Tait (Katelyn MacMullen) will face a shocker. She tried not to get her hopes up about Shiloh actually going to prison, but it should still be hard to hear that he’s free. Michael Corinthos (Chad Duell) will step up for Willow during this crisis while Harrison Chase (Josh Swickard) keeps working to take Shiloh down.

During the week of June 17-21, Maxie Jones (Kirsten Storms) will follow the trail and try to locate Dante Falconeri (Dominic Zamprogna). Unfortunately, Lulu Falconeri (Emme Rylan) will misunderstand a situation soon after. It seems Maxie and Lulu could get their wires crossed here, which could lead to some confusion about what Maxie’s actually up to.

Peter August (Wes Ramsey) will have a plot of his own in motion. He’ll call on Mac Scorpio (John J. York) to assist him – most likely with the Maxie drama. Since Peter can’t stop Maxie from digging around, they might as well get Mac on their side. Back with Kim, she’ll be at the end of her rope. Kim will plead desperately to someone, but who that someone is remains a mystery.

He’ll probably remind Alexis that her own daughter sold her out in her pledge. Alexis will decide she’s had enough of Shiloh and fight back, so he should get an earful.

Across town, General Hospital spoilers say Josslyn Jacks (Eden McCoy) will battle suspicions. Word has it she may get wrapped up in the baby swap plot, so will Joss think something’s off? This could lead to some explosive “Wiley Cooper-Jones” revelations down the road.

Finally, Valentin Cassadine (James Patrick Stuart) will seek Curtis Ashford’s (Donnell Turner) help. He’ll have a task for Curtis that might spell trouble. Will Valentin’s good intentions lead to his own downfall? Sasha Gilmore (Sofia Mattsson) has to be revealed as a fraud sooner or later, so stay tuned.

It sounds like some great episodes are coming up. We’ll give you updates as other GH news emerges. Stick with the ABC soap and don’t forget to check CDL often for the latest General Hospital spoilers, updates and news.