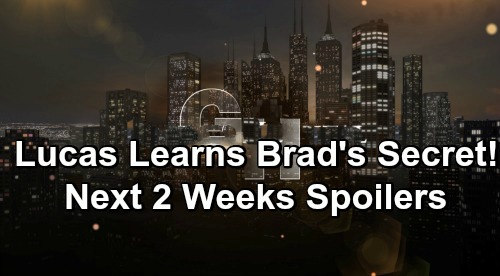 General Hospital (GH) spoilers for the next two weeks tease that some crazy days are ahead in Port Charles. During the week of May 20-24, Sam McCall (Kelly Monaco) will face a raging, worried sister. Kristina Corinthos-Davis (Lexi Ainsworth) will wonder how Sam could possibly be so blind.

Since Kristina was able to see the light about Shiloh Archer (Coby Ryan McLaughlin), she won’t understand why Sam can’t see it, too. They’ll bicker before Sam ultimately leaves the Nurses Ball with Shiloh and sets herself up for trouble. She may find herself facing an initiation somewhere besides the DoD house, which could leave Jason Morgan (Steve Burton) scrambling to form Plan B.

Next, Ava Jerome (Maura West) will step away from the crowd, which is probably the worst thing she could do. That should her right in Ryan Chamberlain’s (Jon Lindstrom) path. Without other guests around to stop him, Ryan could gain the upper hand. Of course, Ava’s filled with enough anger to turn things around. We have faith that Ava will indeed make Ryan suffer eventually.

That could certainly make Brady feel worse about the bigger bombshell! Brad stole Michael Corinthos’ (Chad Duell) son with a little help from Nelle Benson (Chloe Lanier). Lucas’ reaction to the more minor secret should make Brad see how crucial it is to keep his mouth shut.

During the week of May 27-31, General Hospital spoilers say Carly Corinthos (Laura Wright) will express pride in her son. She’ll probably be happy that Michael coped with his loss and the horror show that Nelle brought to his life. Carly will think Michael’s found a great girl in Sasha Gilmore (Sofia Mattsson), so she’ll be hopeful about Michael’s future.

Unfortunately, Sasha’s world may explode soon after. It looks like a mother-daughter lunch with Nina Reeves (Michelle Stafford) will end in total disaster. GH fans can probably expect the fake DNA scheme to come out, which means Michael’s bound to face some heartache, too. He always finds gravitates toward the con artists that hit town!

Back with Kristina, she’ll have a risky idea. Kristina will defend it fiercely, but it looks like Julian Jerome (William deVry) will disagree. He’ll give his support to Sam in a particular situation, so it sounds like the truth will spread among Sam’s circle. Kristina may think she’s the better person to dupe Shiloh, but Julian will feel like they should trust in Sam’s skills.

Other General Hospital spoilers say Anna Devane (Finola Hughes) will deal with an eerie vibe. It seems Alex Devane (Finola Hughes) may get in touch with a creepy message. Anna will become determined to spar with Alex in person. This will undoubtedly involve hashing things out regarding Peter August (Wes Ramsey) and how much he should know.

Anna realizes she probably isn’t Peter’s mother, but she wants to keep pretending she is. If Alex puts that plan in jeopardy, Anna will have every reason to go after her. We’ll give you updates as other GH news comes in. Stay tuned to the ABC soap and don’t forget to check CDL often for the latest General Hospital spoilers, updates and news.