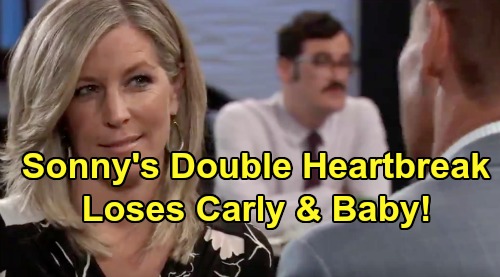 General Hospital (GH) spoilers reveal that Sonny Corinthos (Maurice Benard) and Carly Corinthos (Laura Wright) could be headed for trouble. GH fans know these two have had their fair share of marriage ups and downs. They always seem to find their way back to each other, but they typically hit a rough patch every once in a while.

Something actually seemed to be brewing between Sonny and Margaux Dawson (Elizabeth Hendrickson) at one point. Carly showed signs of jealousy and hinted to Jason Morgan (Steve Burton) that they might not come back from another blow like that. She wasn’t down for a round of cheating between Sonny and the DA.

However, nothing ever came of that other than an occasional friendly moment between Sonny and Margaux. Now Margaux has been written out, and it looks like Carly may be the one leaning in another direction. Some big hints have been dropping about a potential “CarJax” reunion.

Jasper “Jax” Jacks (Ingo Rademacher) recently shared a nice chat with Carly at the Metro Court, and they sparkled as always. There’s a natural and easy chemistry for these two. Jax knows just want to say to calm Carly down, and they genuinely enjoy each other’s company.

At Crimson later, Nina marveled at the way Carly spoke about Jax. She pointed out that it wasn’t how most exes talk about each other, so Carly smiled and admitted they have a special bond. Could that special bond turn into more than friendship again? It wouldn’t be surprising based on how things are shaping up.

General Hospital spoilers say Carly’s facing a risky pregnancy, and her baby has spina bifida meningocele. After Carly’s C-section, her baby will need surgery within two to 48 hours. If her baby even makes it to term, will he or she survive the surgery? One reason for this whole pregnancy storyline may be to set up some crushing grief for “CarSon” and pull them apart.

Grief can take a toll on couples, and it’d be all too easy for Carly to lean on Jax. Will the loss of Carly’s baby make her drift toward Jax? Even if General Hospital doesn’t keep “CarJax” together, they could have an affair or briefly get together during a “CarSon” separation.

Bottom line, there’s bound to be a little something going on between Jax and Carly. GH probably wouldn’t be pushing them together like this otherwise. Will Carly add to Sonny’s heartbreak by turning to Jax after their baby’s potential death? We’ll give you updates as other GH news comes in. Stay tuned to the ABC soap and don’t forget to check CDL often for the latest General Hospital spoilers, updates and news.