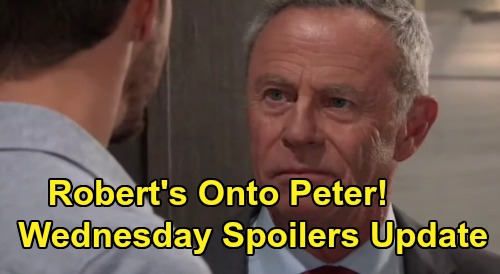 General Hospital (GH) spoilers update for Wednesday, September 4, tease that Cameron Webber (William Lipton) will fume as he watches Kim Nero (Tamara Braun) and Franco Baldwin (Roger Howarth) locking lips. He’ll be ready to march over and give them a piece of his mind, but someone will stop him dead in his tracks. It looks like that someone will be Trina Robinson (Sydney Mikayla). She’ll likely urge Cam to chill out before he manages to make a bigger mess of things.

Cameron will remain livid over the kiss, but Trina may suggest he should keep his mouth shut and let this blow over. It’ll only hurt Elizabeth Baldwin (Rebecca Herbst) if she finds out. However, it seems Cameron will be tempted to spill everything later. His emotions will be all over the place, so it’ll be hard for him to figure out what the right call is.

In the meantime, Kim will come to her senses – at least for now. She’ll point out that Franco has a wife and stepchildren to think about. Kim won’t want to break up the “Friz” family, but Franco will insist Kim’s his family. Oscar Nero Quartermaine (Garren Stitt) has passed on, but Franco will still think they should be together and cling to what’s left of their future.

Of course, Franco can only remember being Drew Cain (Billy Miller). That’s who Kim’s falling for again, which is a problem since Drew’s memories are stuck in Franco. General Hospital spoilers say the situation will remain complicated, so Jason Morgan (Steve Burton) will check in with Liz. He’ll get that she’s dealing with a lot, so he’ll want to be there for her.

Liz will note that her disappointment is a dream come true for Jason, but he won’t see it that way. Franco is still the same person who hurt Jason and the people he cares about. It doesn’t change anything for Jason, and it wouldn’t matter even if it did. He still won’t like seeing Liz and her kids dealing with so much drama.

Over with Julian Jerome (William deVry), he’ll face some difficult news. Alexis Davis (Nancy Lee Grahn) will fill Julian in on some hurdle that’ll delay his move with Kim. It won’t take Alexis long to realize Julian’s more upset about this than he ought to be. She’ll wonder if Julian’s that eager to leave Port Charles, but this is really more about moving Kim out of Franco’s orbit.

At GH, Jordan Ashford (Briana Nicole Henry) will call somebody over to meet with her about Andre Maddox (Anthony Montgomery). Andre’s currently comatose thanks to some mysterious accident – at least it’s mysterious to Jordan and Curtis Ashford (Donnell Turner). It’s a bit clearer to GH fans. We know Peter August (Wes Ramsey) basically ordered a hit to prevent Drew from finding Andre.

Epiphany Johnson (Sonya Eddy) will provide some distressing updates soon enough. Things may not be looking good for Andre at this point. That’s a tough break for Liz, who was hoping to restore Franco’s memories with Andre’s help. She’ll be shattered when she realizes her plan probably isn’t going to pan out.

Next, General Hospital spoilers say Robert Scorpio (Tristan Rogers) will push Peter August’s (Wes Ramsey) buttons. Nevertheless, Peter will push right back and suggest Robert can attack him all he wants. Despite Robert’s attempts to intimidate him, Peter will insist on moving forward with Maxie Jones (Kirsten Storms) and doing whatever else he wants to do. He won’t let Robert stand in his way.

Felicia Scorpio (Kristina Wagner) will have a warning for Robert eventually, so she may think he needs to give it a rest. Maxie and Peter are a blissful couple on the surface. Felicia may not see any reason for Robert to stir the pot, but his gut will tell him something’s up. It sounds like Peter had better watch his back!

Finally, Maxie will encourage Mac Scorpio (John J. York) to be careful. It seems Maxie will be brought up to speed on his permanent position at the PCPD. Mac will serve as Chief of Detectives, so Maxie just won’t want him looking for trouble. It’s one thing if it finds Mac anyway, but there’s no need to summon it unnecessarily!

General Hospital fans won’t want to miss the bombshells ahead. We’ll keep you posted as other GH details emerge. Stick with the ABC soap and don’t forget to check CDL often for the latest General Hospital spoilers, updates and news.