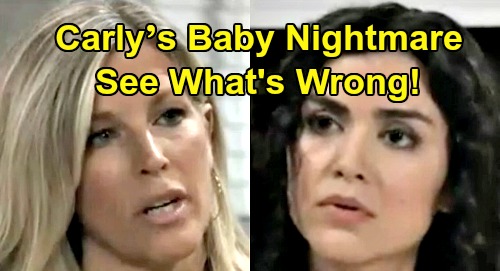 General Hospital (GH) spoilers tease that there’ll be major concerns about Carly Corinthos’ (Laura Wright) baby. What’s wrong with her little one and how will it affect the story moving forward? Let’s look at some options before GH delivers this blow.

Pregnancy after age 40 brings added risks for both the mother and the child. Carly could be facing issues like premature labor, miscarriage, placenta previa and birth problems that could require a C-section delivery. However, General Hospital spoilers state that the baby itself will be at risk for something, so we have to consider what that something might be.

The most common genetic condition that Carly’s baby could have is Down syndrome, which causes both physical and intellectual disorders. Down syndrome occurs in one in 792 births, and is not related to race, nationality, religion or socioeconomic status. Although people with Down syndrome have a shorter lifespan than most, they can still live a long, happy life.

Carly and Sonny Corinthos (Maurice Benard) could certainly handle a child with Down syndrome, and the family would love that child with all their hearts. Other chromosomal disorders are less likely such as Turner’s syndrome, which affects only females. Edward’s syndrome is another disorder; most of its survivors are female but don’t live to reach a year old.

Klinefelter’s syndrome only affects males and causes infertility in them, but they can live as long as normal individuals. Patau’s syndrome is another possible problem Carly’s child could have. The chance of this disorder increases with maternal age as well, and their average lifespan is 31 years of age. That would be some difficult news for Carly to hear.

General Hospital writers could take a different route by making Carly’s child blind or giving him or her a limb disorder. The baby could even have a heart defect as Michael Corinthos (Chad Duell) had when he was born. If Carly’s child has any sort of birth defect that could be treated by Shriner’s Hospital, GH could write a storyline that ties in here.

Soaps often hint at an issue that could cause a congenital disability for a child, but everything usually turns out fine. Then again, General Hospital might try to reflect some real-world drama with a groundbreaking story. Carly and Sonny could have a mentally or physically challenged baby.

If this “CarSon” kid survives, will he or she have a congenital disability that’s addressed by the show? We’ll give you updates as other GH details emerge. Stay tuned to the ABC soap and don’t forget to check CDL often for the latest General Hospital spoilers, updates and news.