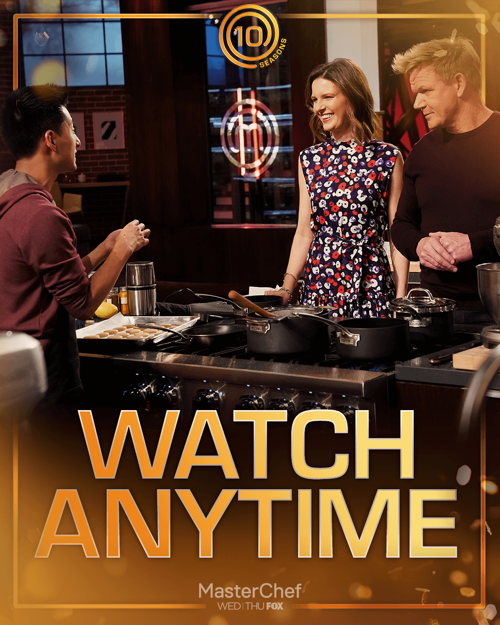 Tonight on FOX Gordon Ramsay’s Masterchef returns with an all-new episode on Thursday, August 7, 2019, season 10 episode 16 called “NASCAR – Finish Line Feed,” and we have your weekly Masterchef recap below. On tonight’s Masterchef episode as per the FOX synopsis, “The Top 10 contestants test their speed in a special team challenge at: Irwindale Speedway.

The judges come racing to the home cooks in speedy race cars before introducing NASCAR driver Bobby Labonte. Told to break into two teams, the contestants are given 75 minutes to cook for 101 race car crew members.”

It was another Team Challenge for the contestants. This time they were taken to the MasterChef Speedway or the racetrack as the rest of the world calls it, but it turns out the two teams were going to be working the line at an expo. They were going to be feeding the drivers and their pit crews. These pit crews were also in the middle of a race and so they needed to be fed fast. There were also going to be a hundred people there tonight. The Red and Blue teams needed to ensure that not a single person went hungry and so the judges allowed them to pick their own effectual teams. The Blue Team was captained by Shari. She had Bri, Nick, Noah, and hgh. The Red Team was captained by Micah. He had Jamie, Sarah, Dorian, and Subha on his team and so his weakest link was naturally Subha.

It was literal amazing how long Subha has stuck around. He was a complete failure at team challenges and he was easily frazzled under pressure, but if there was one thing he was good at. He knew his flavors. Subha knew the right amount seasoning to any dish and so his team captain had wanted to give him something he thought was easy. Micah put Subha on the polenta station. He thought that Subha could handle it and he had been wrong. Jamie had seen Subha focusing on the wrong thing. Jamie was so afraid for the polenta that he quickly took Subha off it. He gave Subha the prep station and he took over on polenta. So the Red Team quickly course-corrected themselves. And things were different on the Blue Team.

The Blue Team selected salmon as their protein. The cook on it had to be just perfect and so it didn’t seem like the best fit on such a day. Not when it’s raining. The rain was coming down so hard that the judges had to get extra pavilions and still that hadn’t been enough. The raining was getting into the pans so much that it took out one side of the burners. Noah couldn’t grill any of the fish on his side and he was forced to leave it all to Nick. Noah made himself useful in other ways by covering for Shari on the potatoes. She had tried baking them when she should have been deep-frying them. Its what Noah did and he had gotten potatoes just right. Then the salmon when downhill. He couldn’t get the cook right without Noah and Shari didn’t take on the job.

Its what she should have done, but she chose to just scrap the crispy skin and she didn’t even hold to that decision. She ended up changing her mind down the line and said the crispy skin is back on. She also left Nick to suddenly figuring out what she was trying to say. Shari wasn’t on potatoes anymore because she gave it to Noah and so why couldn’t she put the salmon in the oven? It’s like she never even consider the idea. Shari was so wrong that Ramsay had to restructure her kitchen for her. He put Noah back on fish and, as they were recovering, it was the Red Team that was going down. Micah was plating dishes without the protein. Sarah was on chicken and she needed additional time to cook a hundred pieces of chicken.

Subha tried to help and all he did was destroy. Subha put grilled meat and put it on charred. It burnt the meat and Micah had to tell him not to scrap it off. Micah was so frustrated that he ended up having to become like Jamie. He to take Subha off a station. Micah left everything to Sarah and Sarah had to convince Subha to not touch her own chicken. She was doing just fine by herself. She served a hundred pieces of chicken and both teams were able to finish this challenge. The win, however, went to the Red Team. They were consistent and strong. The Blue Team, on the other hand, had delivered raw food and they had a captain that was too soft-spoken. She tried to say sorry about it and Nick told her she wasn’t at fault. Only Noah said they lost because they were weak.

Noah said that they should have won and the fact they didn’t fell on them. Most of the people on the Blue Team have never lost a challenge before and so that’s why some of them were taking it extra hard. But now they have to cook for their lives. They will all be competing tomorrow for the Elimination Challenge and Micah was also asked if he wants to nominate anyone from his team to cook in that challenge as well.

Micah thought about it and tomorrow he reveals his answer.