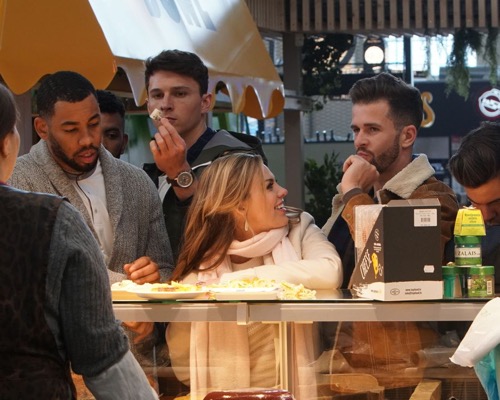 The Bachelorette Season 15 Episode 6 airs on ABC this evening with an all-new Monday, June 24, 2019, season 15 episode 6 and we have your weekly The Bachelorette recap below. On tonight’s season 15 episode 6 as per the ABC synopsis, “Emotionally exhausted from last week’s drama but resolved to get her journey to find love back on track, Hannah looks forward to taking her nine remaining men to beautiful Riga, Latvia, on the Baltic Sea.

One handsome suitor, who has been crushing hard on Hannah, is awarded the first one-on-one date. It turns out to be a heart-stopping but liberating experience as the couple bungee jump wearing little clothing; however, when the man kisses and tells about his lusty date, how will the other men react?”

In Riga, Latvia, Hannah is hoping to finally have things calm down after the Rose Ceremony in Scotland. It is very important for the guys to handle things properly this week. Luke P. tells the guys he was frustrated last week, they want to hear none of it. A date card arrives, it is for Garret, “can I trust our love.” Luke P. is jealous, and in fact, he says he knows there is no guy there that feels the way he does about her.

Garrett meets Hannah for their date, he is excited to spend the whole day with her, and she is along for the ride. Hannah tells him that today they are going to work on trust; they are going to take a leap for love. Hannah brings him to naked bungee jumping. Hannah swears on her life that she didn’ know they were going to have to be naked. Garrett is blushing, Hannah says her mom might kill her. Garret and Hannah arrive in a cable car, they are naked under bathrobes. It’s freezing, the two get attached together, Garret says he has got this with her. Hannah takes off her bra, it is the last remaining piece of clothes. They count to three, say they trust each other and they are gone. They had a blast. They pop a bottle of champagne, and couldn’t be happier that they both did it and had fun. The two feel closer to each other. They talk about the last Rose Ceremony, he says it taught him a lesson, he is not going to waste any more time. Hannah is so happy, Garrett was exactly what she needed.

At dinner, Garrett says he loved the way Hannah was vulnerable during their date. He then asks her what is the biggest hurdle she has ever climbed, she says it is being herself. He tells her that he grew up a big football fan, he thought it was something he should, and did it because everyone else wanted him to do, and he hated it. Hannah asks Garrett if he will accept a rose, he says yes.

A date card arrives and it is a group one for Mike, Jed, Tyler, Dustin, Luke P., Connor, Dylan; “let’s discover Riga.”

Garrett returns to the men and tells them that he went naked bungee jumping with Hannah. Luke P. is clearly upset, he can’t believe that Hannah would do that.

Time for the group date, Hannah is excited to roam the streets of Riga with the men on the group date. They start by browsing a market, and they get to sample moonshine. Next, they try pickles, everyone is getting along. Jed buys Hannah flowers and shares a kiss with Hannah, Mike interrupts them and asks if they can get back to their group date. Hannah is having a great day, everybody is getting along and they are making her feel so good; this happened in a while during a group date. Hannah starts talking to the men about her bungee jumping naked with Garrett and tells them that it was the greatest experience ever. Luke P. thinks that Hannah crossed the line on her date with Garrett.

It’s the end of the day, Hanah makes a toast and thanks to the men for stepping up. Tyler C. gets some alone time with Hannah and neither of them misses the opportunity to make it; Hannah climbs right on top of him. There is a piano, Jed plays for Hannah

Luke P. tells the men that he was taken aback that Hannah went naked bungee jumping. Tyler C. says she is making her decisions for herself and he is proud of her. Luke P. and Hannah have some alone time. He says he has something he has to tell her and she is not going to like it. He says that it is hard for him to know that her body is a temple, and honestly, he is just thinking of her holding his bare skin and it pisses him off. Hannah says it wasn’t in a sexual way, and she wanted the experience. He says still, he thinks it is a slap in the face. At the end of the day, he says they are going to get through anything. He thanks her for letting him be real and hopes she will understand him better.

Its time for Hannah to give out the group date rose, she gives it Tyler C. and tells him that he was just awesome. Luke P. looks like a ticking time bomb.

Time for Hannah’s date with Peter and they are going to experience a Latvia spa day. Peter is game no matter what it is. They are welcomed by a couple who tells them that it is a place where couples can get closer to each other. First, they change clothes. The woman sings while Hannah and Peter are standing there with their robes on. They are making a honey sauce to rub on their bodies. They go into a steam room, they both have their bathing suits on. They both like the sweaty look after they are covered with honey. They are alone in the steam room and start making out. Next, they head outside in a hot tub. Peter tells her that he is so all about this, he promises to give her that fire and that rock to lean on, he is all in. Hannah says she has no doubts that he is all in, and is happy that they finally got there one on one. They make out in the hot tub. It’s the evening and its dinner for two. Hannah knows they have chemistry, but she wants to know if there is the substance behind it. Peter asks her where her strength and confidence comes from. She says she has always had a spitfire personality. Peter tells her that he was serious about someone in the past, but it just wasn’t meant to be and this is why it was hard for him to open up. He says it was his biggest heartbreak and now he is falling for her, it is a scary feeling but a beautiful feeling. Hannah tells Peter that they obviously have connections beyond physical, and with that being said, she gives him a rose.

Peter returns from his date, he tells the men about his date. Jed misses Hannah, he puts his coat on and is determined to do whatever he has to spend time with her. He goes outside her window and there with his guitar, he sings to her. Hannah lets him in, she loved what he did and says it feels right out of a romance novel. They both get on her bed and he continues singing to her. He stops playing and Hannah puts the guitar to the side, she climbs up on top of him and they make out. Jed tells her that he feels deeply that he is falling in love with her, and that he is thankful for her.

Garrett speaks to Luke P. about his talking about his one on one date with her. Luke P. says that he felt that it was a lack of respect for Hannah. Luke P. tells him that she is his girlfriend, but she is also his and wants his promise that this is not going to go into the Rose Ceremony. Garrett wants to know why he should promise him anything.

In the morning, Hannah arrives in the men’s room and asks Luke P. if she can talk to him. Hannah has been processing what Luke P. said about her fate with Garrett and how it made her feel. She tells him that she appreciates his coming to her and having a real conversation, but it didn’t sit well with her. She didn’t like the language that he used, he felt it was a slap in the face, then he said we all make boneheaded mistakes and that he wanted to feel confident in her meeting his family. She says it wasn’t a sexual thing at all, but even if it was, at this point it doesn’t matter because he is not her husband and he doesn’t own her body. Luke P. says that he has full trust in her, and if she is the woman he will marry one day, then he has to have trust in her. He says he doesn’t want to know what she is doing with the other men, he is just trying to focus on him and her. Luke P. tries to back out of the words that he said and says that he was totally misunderstood. Luke P. says the train is finally on the track and she says she doesn’t know if it is. He apologizes for being misunderstood and says he was not questioning her character. He asks for forgiveness. Hannah says this is every single time. Luke P. says he is trying hard and will do only better for them. Hannah says it can’t take this every single time for him to be himself. Again, he apologizes and says that if she keeps fighting, it will be worth it.

Luke P. returns to the men and tells them that what he discussed with Hannah is private and he is not going to talk about it but if they didn’t talk about their dates, this would not have happened. Luke P. says he is going to stay in his lane, Mike says he won’t.

Luke P. gets into an argument with the men and even tells Garrett to keep his mouth shut. Jed tells Luke P. to keep it down, Hannah is going to hear them. Chris H. walks into the room and asks what is going on. He says he just saw Hannah, she is a little emotional, there is not going to be a cocktail party, they are going straight to the Rose Ceremony because she knows exactly what she wants to do.

Time for the Rose Ceremony. Hannah says she really didn’t know what to expect in Latvia, but even though they had a few struggles, it was great, and she really thinks her husband in the room.

The first rose goes to Jed, then Mike, Connor, and the final rose goes to Luke P. Wow, what a shocker! Dylan and Dustin are sent home.