The Bold and the Beautiful Spoilers: Hope Comes Clean About Thomas Bombshell – Stunned Liam Decides the Fate of ‘Lope’

BY Heather Hughes on November 15, 2019 | Comments: one comment
Related : Soap Opera, Spoiler, Television, The Bold and the Beautiful 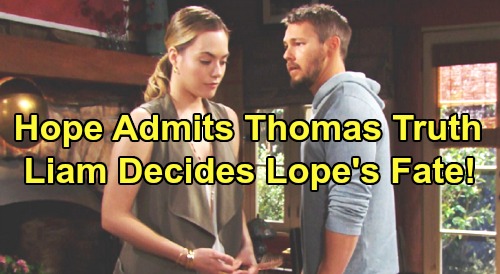 The Bold and the Beautiful (B&B) spoilers tease that Hope Logan (Annika Noelle) will find herself in a tight spot. Well, a tighter spot since she’s in a pretty tight one already! Hope believes she killed Thomas Forrester (Matthew Atkinson), but she’s wrong about that. Thomas will make his stunning comeback during the week of November 18-22, so Hope will have to deal with the fallout.

Naturally, Thomas will be fuming over Hope’s manipulation and the shove that could’ve led to his death. He’ll undoubtedly rip into Hope during his surprise visit, but she’ll assure him she never wanted a fatal outcome. Hope will be quite relieved to know she’s not responsible for taking Thomas’ life. She’ll be glad Douglas Forrester (Henry Joseph Samiri) still has his dad, too.

Hope may want to brush their showdown under the rug and just try to get past this, but will Thomas allow it? It looks like he may pressure Hope to come clean with Liam Spencer (Scott Clifton), but he won’t fight Hope on the custody issue. Thomas signed the papers and will honor their agreement for now – mostly for Douglas’ sake. The kid will be on cloud nine to know Mommy Hope’s his official mommy now.

That’ll leave Hope to face Liam and figure out how to handle the rest of this mess. Thomas may suggest that if Hope doesn’t tell Liam the truth, he’ll do it for her. He may think Liam needs to know that Hope shoved him into an ominous-looking vat and deceived Liam about it. Then again, Hope’s confession may be a way to avoid Thomas’ potential blackmail. She may think this is the only way to slip out of Thomas’ tightening grip.

Whatever the case, The Bold and the Beautiful spoilers say Hope will indeed confess to Liam during the week of November 25-29. She’ll reveal the details of her faceoff at Forrester Creations, but will she spill all? There’s a chance Hope’s confession won’t be a full one. It probably depends on how much pressure Thomas is applying and how much guilt Hope’s grappling with.

If Hope does tell Liam every single thing that happened that night, he may be surprised that Hope’s capable of this. Hope didn’t mean to kill Thomas, but her actions led to things blowing up in a big way. Liam may suggest Hope’s plan was reckless and could’ve cost Douglas his father.

B&B fans can expect a Thanksgiving celebration for Liam, Hope, Douglas and Beth Spencer (River Davidson and Madeline Valdez). That doesn’t necessarily mean Liam will say “no big deal” and move on though. It’s possible Liam will decide not to spoil Beth’s first Thanksgiving with drama. He may need time to wrap his head around all this and figure out if he can get past Hope’s lies.

After all, that’d be an easy explanation for everything being put on hold. The Bold and the Beautiful always provides some heartwarming moments for the Thanksgiving holiday, so that could be how they’ll explain it.

Regardless, Hope’s admission will catch Liam off guard and could signal a shift in their relationship. Can Liam forgive Hope for her deception? Is this the beginning of the end for Liam and Hope? We’ll give you updates as other B&B news comes in. Stay tuned to the CBS soap and don’t forget to check CDL often for the latest Bold and the Beautiful spoilers, updates and news.