BY Heather Hughes on February 10, 2019 | Comments: one comment
Related : Soap Opera, Spoiler, Television, The Bold and the Beautiful 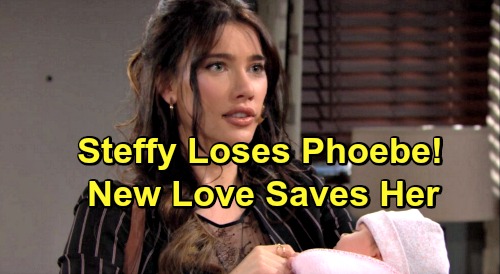 The Bold and the Beautiful (B&B) spoilers tease that Steffy Forrester (Jacqueline MacInnes Wood) will focus on her family in the coming weeks. She already had her hands full with Kelly Spencer (Zoe Pennington and Chloe Teperman), but now she’s added Phoebe Forrester (Isabella de Armas and Redford Prindiville) to the mix. It’s become quite the baby hub over at Steffy’s place.

Steffy’s in for some long nights and exhausting days, but she wouldn’t have it any other way. She loves her girls with all her heart, so she’ll have no problem devoting herself to them for the time being. Ever since Steffy’s split from Liam, she’s been focusing on Kelly and her career. Now she’ll have Phoebe to keep her busy, too. There probably won’t be time for much of a love life just yet.

It’s possible Steffy and Liam will start moving in the direction of a reunion eventually. Hope Spencer (Annika Noelle) is in a very fragile state, so Liam will need someone to lean on. He’ll also want to be a great dad to Kelly and Phoebe. B&B fans know that fatherhood is extremely important to Liam

Liam doesn’t know he’s actually Phoebe’s father, but he intends to serve that role anyway. He could begin to feel sparks with Steffy again, especially if Hope pulls away. If they try to keep her from Phoebe for her own good, Hope could easily isolate herself and suffer more than ever.

However, a Liam and Steffy reunion will be doomed if they pursue it now. There’s a good chance Steffy will find out the truth about Phoebe and keep quiet – at least for a little while. The Bold and the Beautiful spoilers suggest Steffy will struggle to hand over the baby she came to think of as her own.

Whether they’re an item by the time all this goes down or not, tension could explode for Liam and Steffy. Steffy should feel a tremendous sense of loss when this is all over. She’ll lose the daughter she illegally adopted and most likely the strong connection she has with Liam. Those will be two devastating blows for her to cope with.

Fortunately, there could be light at the end of the tunnel. When this is all over, it’ll be the perfect setup for a new love story. Steffy may lose her baby and her Liam bond, but there may be the ideal man waiting to comfort her. She could make lemonade out of lemons and turn this into something good for her life.