The Bold and the Beautiful Spoilers: Thomas Holds Hope Hostage After Beth Reveal – Furious Liam to the Rescue?

BY Heather Hughes on July 4, 2019 | Comments: one comment
Related : Soap Opera, Spoiler, Television, The Bold and the Beautiful 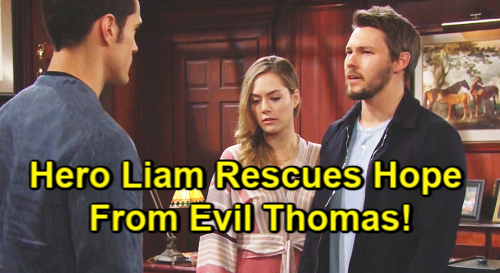 The Bold and the Beautiful (B&B) spoilers tease that Thomas Forrester (Matthew Atkinson) will get his wish. Douglas Forrester’s (Henry Joseph Samiri) coached proposal will be followed by Thomas’ very romantic real deal. He’ll go all out to make Hope Logan (Annika Noelle) feel special. Thomas will do and say everything he can to make Hope believe they could have a happy, long-lasting future together.

During the week of July 8-12, Hope will accept Thomas’ offer of marriage. She’ll put on Thomas’ engagement ring, even though she won’t really want to. Hope will likely feel like this will send a clear message to Liam Spencer (Scott Clifton) and maybe even herself. She’ll want to convince everyone that Liam is only part of her past now.

Hope may think it’ll ease her pain a bit if she moves forward with Thomas. She’ll have someone to love her as Liam’s love for Steffy Forrester (Jacqueline MacInnes Wood) grows. Hope doesn’t love Thomas back yet, but she’ll be willing to try. She just won’t feel like she has any other choice since she believes Liam, Steffy and the girls must be a family.

Thomas Forrester Is Eager To Make Hope Logan His Wife

Of course, Thomas won’t care how he gets what he wants as long as he gets it. The Bold and the Beautiful spoilers say Thomas will want this wedding to happen as fast as possible. He’ll be eager to make Hope his wife and lock in this chance with her. Thomas will dote on Hope and try to make her see that this can work. He may make some progress over the next few weeks.

However, there are some big problems here. For starters, Thomas knows the truth about Beth Spencer and is keeping it a secret from Hope. If that tidbit ever gets out, his relationship with Hope is over. Thomas will lose any shot he has with the woman of his dreams.

There’s also the matter of Thomas’ other awful behavior – like smirking down on bloody Emma Barber (Nia Sioux) after contributing to her death. He also manipulated Hope repeatedly and even drugged Liam so he’d have sex with Steffy. B&B spoilers say none of that’s going to help Thomas’ case when it’s exposed.

Xander Avant (Adain Bradley) will put himself in harm’s way as he works to prove Thomas is a monster. He might face a grim fate if he truly threatens Thomas’ happiness. However, it’s clear that Hope is going to see the light one way or another. Something will eventually open Hope’s eyes to how devious and out of control Thomas is.

The Bold and the Beautiful spoilers say Thomas’ obsession will be far worse by then, so what will he do? No one would be surprised if Thomas became unhinged and held Hope hostage. Hope might discover the Beth lie and confront Thomas only to get kidnapped. In Thomas’ mind, he may believe he can somehow fix this if they get away from Liam and the rest of the world.

That could set up a great opportunity for Liam to swoop in as the rescue ranger. Will Liam save Hope from Thomas’ clutches? Is a final face-off between Thomas and Liam brewing? We’ll give you updates as other B&B news comes in. Stay tuned to the CBS soap and don’t forget to check CDL often for the latest Bold and the Beautiful spoilers, updates and news.