BY Heather Hughes on December 26, 2019 | Comments: one comment
Related : Soap Opera, Spoiler, Television, The Bold and the Beautiful 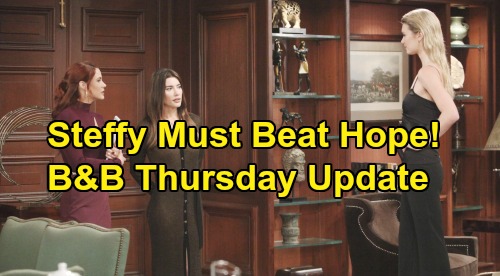 The Bold and the Beautiful (B&B) spoilers update for Thursday, December 26, teases that some hot drama’s on the way. We should note that Wednesday’s episode will be a repeat, but B&B will be back with an all-new episode on Thursday. Now let’s look at what’s cooking up for Thursday’s show.

Steffy Forrester (Jacqueline MacInnes Wood) will hold out hope that her brother’s turned over a new leaf. She knows it’s wise to be wary when it comes to Thomas Forrester (Matthew Atkinson), but she still wants to believe he’s on a better path. Steffy just filled Brooke Forrester (Katherine Kelly Lang) in on the plan, which involves using Zoe Buckingham (Kiara Barnes) to report back on Thomas’ motives.

As Steffy pointed out, she’d like for Thomas’ interest in Zoe to be legit – for both Thomas and Hope Logan’s (Annika Noelle) sake. However, Brooke will insist she’s highly skeptical of this plot working. As much as Brooke would love to expose Thomas’ continued scheming, she just won’t know if Zoe can make this happen.

Nevertheless, Brooke will at least think the idea behind it is a good one. In her opinion, Thomas simply must be stopped. Brooke will be glad Liam Spencer’s (Scott Clifton) trying something, but she’ll have a big problem with being left out of the loop.

On Thursday’s new episode, December 26, Steffy will explain to Sally Spectra (Courtney Hope) that she has to win the fashion competition against Hope and Thomas. B&B fans are well aware that Steffy feels she lost Liam to Hope and baby ‘Phoebe’ as well. Losing again to her arch rival is simply unacceptable to Steffy!

B&B spoilers say Brooke will corner Liam and start ranting. She won’t understand why Liam wouldn’t bring her up to speed – especially when Hope’s at risk. Liam may be apologetic, but this is something he had to keep a tight lid on. The fewer people who know, the better the chance they can dupe Thomas.

Liam will go on a tirade of his own about the destruction Thomas has caused. He’ll feel like Thomas demolishes lives and everything that stands in his way. Liam certainly won’t trust Thomas anywhere near Hope – and Brooke will back him up on that. They’ll discuss the dangers of Hope working with Thomas and potentially lowering her guard.

However, Hope’s guard will remain up for now. The Bold and the Beautiful spoilers say Thomas will make his next move on Thursday. He’ll slide his hand over Hope’s and show her how to design, but Hope won’t appreciate that kind of “help.” She’ll call Thomas out for whatever he’s trying to pull here.

Thomas will assure Hope that he only wants to assist her on the fashion showdown and be great co-parents. Hope will make Thomas swear that he doesn’t want anything more – and he’ll indeed swear it. Thomas will promise Hope that he’s done obsessing over her, but that’s obviously not the case.