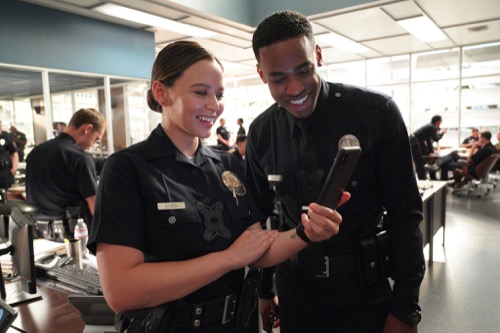 Officer Nolan soon discovers that no two informants are the same and struggles with his newest task. Meanwhile, Officer Chen’s mother complicates her home life when she comes to stay with her.”

Nolan’s son flew out to see him. Nolan tended to miss his one and only child. It was good for him to see Henry in person and talking to each other over skype didn’t always do it. Nolan was glad to see his son and to hold him. Nolan was always glad for a hug. He even received one from Henry’s girlfriend Abigail. Abigail and Henry flew out on her miles and so Nolan didn’t begrudge meeting her, but he didn’t think this young couple was going to announce their engagement. They were both twenty years old and this felt a bit rushed.

Nolan, however, didn’t say that when he was told the news. He chose to instead congratulate the couple and then worry about it afterward. Nolan told his friend Nick Armstrong at work what happened. Nick told him he should investigate Abigail on the side and Nolan wasn’t so sure about that. He didn’t want to go stepping on anyone’s toes. He just wanted to do his job and so that’s what he did. He and the rest of the trainees tasked with setting up their own Criminal Informants. And Nolan soon found his in Bianca.

Bianca was caught with a bag of drugs. She was facing jail time and so the out that Nolan provided her was a rare opportunity. All this low-level drug mule had to do was her job. She had to go to her drug dealer and hand him the bag of drugs like she always does. Bianca had been nervous in the beginning, but that was expected. Nolan was there to reassure her and he tried to get Bianca to see the bigger picture. She later went to the dealer like planned. She handed him the drugs and the officers left her by herself because they were thinking about the bust.

It wasn’t until Nolan returned to the motel room that he saw how quickly Bianca unraveled. She had blood on her and was in and out. Nolan had to call a bus for her because he was that worried. It turns out Bianca still carried some drugs on her and she had overdosed. She hit her head on the way down hence the blood. Bianca was going to be okay in the end because the officers got her to the hospital in time, but Nolan knew he needed a new CI now. Though he wasn’t the only one having trouble with a CI.

Officer West had tried to poach a CI from the feds. It had been his TO’s idea and West merely went along with it. They approached a man who could deliver a high profile intel. They even promised him anything and so he used them to hurt his ex. He waited for them to do that before he called his handler with the FBI and claimed that the LAPD was harassing him. This naturally got back to the Sarge who now felt West blew his one chance. And so now West is in trouble for following Officer Lopez’s idea.

West was seemingly further away from short sleeves. He was back in the dog house and Chen was faring only a bit better. Her professionally was okay. It was her personal life that was unraveling because her mother had moved in with her. Chen’s mother had unfortunately left her father because of something stupid. Normally, Chen would have been understanding. She was the child of therapists after all and so she was great at empathy. She just had trouble with her mother moving in. She didn’t want to be hemmed in by her mother and nor did she want her mom to feel bad. Chen was simply trying to find a way to tell her mother to leave without offending her.

Chen was so busy worrying about her mom that her work slipped without her noticing. Chen had turned a pawn shop owner into her CI and at first, it was great. The woman pointed her towards a teenager who had been stealing from her stepmother. It turns out the stepmother was once the mistress and that the affair the same time the teenager was slowly losing her mother to cancer. So, the teenager was a young woman with a grudge. She first stole the handbags and then she bought a guy.

Chen and Bradford walked in on the teenager shooting up her stepmother’s things. The stepmother was going to press charges, but the maid stepped in and told the police where the stepmother hid her drugs. Thus taking of that situation. Chen and Bradford still walked away with a credible informant and that was more than Nolan. Nolan didn’t know where to start with finding a new CI. He ended up asking Nick as a friend and Nick did come through for him. He just went a little too far when he also investigated Abigail.

Nick handed Nolan a file on Abigail. Nolan wasn’t sure if he wanted to read it or not and yet he held onto it. He asked all of his friends for help and they were just as unsure about it. Nolan then handed the file to Grace. She was supposed to throw it away for him and she ultimately read for it herself. She found out that Abigail was arrested for arson and that she used a substance against her ex-boyfriend. Abigail showed she could be violent if pushed. Grace told Nolan everything and then he was left with the decision of whether or not he wanted to talk about it to his son. Did Henry deserve to know?

Nolan also found a new CI. He found a forger that was now working for him and this forger brought intel of a group of women using fake IDs. Nolan and Harper assumed it was human trafficking. They went there and what they found was a group of scared women. The women were fleeing from their lives in the cartel. They didn’t want to be a part of the violence anymore and so they were trying to start over. But one of them left their cell phone. They were tracked because of it and that left Nolan and Harper facing a down a group of armed cartel members.

Luckily, they had called for backup in time. The cartel members were driven off by the overwhelming forces of the LAPD and the two officers had protected this group of women. Only this wasn’t the only achievement. West managed to turn it around and he got a credible CI while also upsetting the feds. The Sarge was perfect with that as long as it meant West succeeded. He also granted West the chance to wear short sleeves so now West was on par with everyone else in his class.

Nolan also got to talk to Abigail and Henry about her history and it wasn’t anything new to Henry. He knew everything from the start. He also knew the full story. Like how Abigail’s ex-boyfriend had posted private videos of her online and that she tried to burn the footage only to be arrested. So, Nolan ended up apologizing to the young couple. He realized he let his fears dictate actions and he swore it wouldn’t happen again.

And Chen’s mother ended up going back to her father after Chen parent-trapped them.