The Young and the Restless Spoilers: Comings and Goings – Huge Returns and Departures – Special Debuts for J.T. Murder Shocker

BY Kinsley Goldman on January 12, 2019 | Comments: one comment
Related : Soap Opera, Spoiler, Television, The Young and the Restless 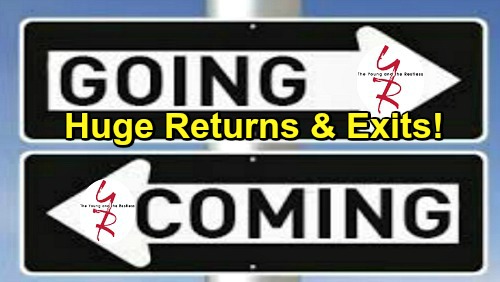 The Young and the Restless (Y&R) spoilers reveal that we’ve got some comings and goings news to pass along. For starters, let’s talk about one Y&R star’s return appearance. There’ll be another Lily Ashby (Christel Khalil) sighting this week as Cane Ashby (Daniel Goddard) goes to visit his wife. Sadly, their time together will only bring heartbreak. Cane will be taken aback by what Lily shares with him.

It’s possible that Lily will make this their last visit. She’s hardening her heart to survive in prison, so maybe she won’t think it’s a good idea to keep seeing Cane. Of course, Lily could also do something extreme like announce that she wants a divorce. Her head’s in a dark place, so she could easily decide to end the marriage. Lily just isn’t herself these days and she fears she may never be again.

Other Young and the Restless spoilers say Hunter King is set to reprise the role of Summer Newman. She was spotted on set recently, so we’ll just have to be patient and wait for her scenes to hit the air. Summer always bring drama when she comes home, which means trouble could be brewing for Kyle Abbott (Michael Mealor) and Lola Rosales’ (Sasha Calle) relationship.

Next, we should mention a departure that’s coming up. On Monday, January 14, Reed Hellstrom (Tristan Lake Leabu) tells Victoria Newman (Amelia Heinle) that he’s ready to go back to school. He was hesitant to leave with so many J.T. Hellstrom (Thad Luckinbill) questions hanging over him, but the abuse revelation changed that. Either Reed doesn’t care as much or perhaps he now believes answers only bring pain.

Whatever the case, Y&R fans can expect Reed to leave Genoa City soon. He’ll say goodbye to his loved ones and get away from all the murder mayhem. Speaking of murder mayhem, two special guest stars will become part of it. Nischelle Turner and Suzanne Marques are real-life entertainment news correspondents. They’ve filmed some intriguing scenes as characters who cover the J.T. story in GC.