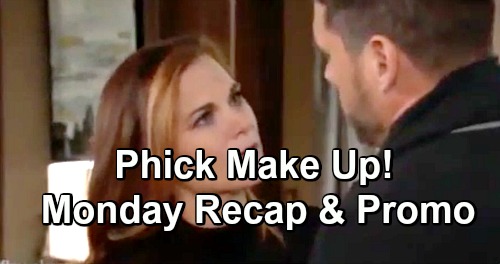 The Young and the Restless (Y&R) spoilers and recap for Monday, January 14, tease that Nikki Newman (Melody Thomas Scott) will share half the truth. She’ll tell Nick Newman (Joshua Morrow) about killing J.T. Hellstrom (Thad Luckinbill) with a fireplace poker after she caught him attacking Victoria Newman (Amelia Heinle). Nikki will talk about how they rolled the body in a rug and buried it in the park.

However, Nikki will choose to leave Sharon Newman (Sharon Case) and Phyllis Summers (Gina Tognoni) out of this. She’ll turn Nick’s attention to Victor Newman (Eric Braeden), who’s sitting behind bars in an attempt to protect her. Nick will make sure Nikki’s got plenty of security at the ranch and assure her that they’re going to get Victor off the hook.

Meanwhile, Phyllis will feel guilty about blowing up the memorial service. Billy Abbott (Jason Thompson) will bump into her at Crimson Lights and rant that the abuse wasn’t her secret to tell. Phyllis will be apologetic, but she’ll also be a bit petty. She’ll contend that maybe Billy should be grateful since he got to be Victoria’s knight in shining armor.

Later, Phyllis will meet back up with Nick. She’ll want to offer a heartfelt apology, but he won’t be so angry anymore. Phyllis won’t understand, but Nick will suggest that it happened in the heat of the moment. He’ll think Phyllis’ honesty is admirable, so they’ll kiss and make up.

At Rey Rosales (Jordi Vilasuso) apartment, Arturo Rosales (Jason Canela) will lash out. He’ll think Mia Rosales (Noemi Gonzalez) enjoys having some kind of power over him. Mia will feel like Arturo has a better grip on who she is than Rey does, but Arturo will just want to get out of there. He won’t want to hang around and risk screwing things up with Abby Newman (Melissa Ordway).

Arturo will wind up at the Abbott mansion eventually. He’ll make a passionate speech about how he was wrong to try and keep it casual. Arturo will insist that fear was holding him back, but not anymore. He’ll assure Abby that she’s his future.

Other Young and the Restless spoilers say Rey and Sharon will have an awkward morning at the motel. They’ll consider stopping for breakfast on the way back to Genoa City, but they’ll ultimately decide to head on home. These two don’t need any more temptation!

When Rey arrives at his place, Mia will reveal that she knows Sharon was with him. Rey will be sorry that he lied, but he’ll promise that nothing happened. After he learns Arturo was there to repair the furnace, Rey will push for trust on both sides. He’ll lock lips with Mia and insist he’s going to keep fighting for their marriage.

Y&R fans can also expect a big decision from Reed Hellstrom (Tristan Lake Leabu). He’ll find Victoria and once again express sympathy over the abuse. Victoria will just think Reed has to form his own view of J.T. He has to decide for himself how he’s going to remember his dad. After they talk, Reed will believe it’s time for him to head back to school.