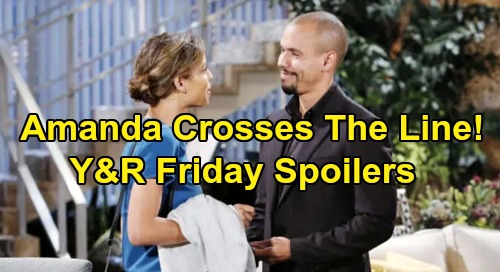 The Young and the Restless (Y&R) spoilers for Friday, October 11, reveal that Victor Newman (Eric Braeden) and Nikki Newman (Melody Thomas Scott) will stick together. Their family’s been stuck in turmoil thanks to Adam Newman (Mark Grossman) as well as Victor’s fake death. The aftermath has been rough on the Newman clan, but Victor and Nikki will feel like things are starting to settle down.

Victor will be confident in Victoria Newman (Amelia Heinle) as Newman’s leader for now. There are still some personal issues going on within the Newman clan – like Connor Newman’s (Judah Mackey) outbursts and Summer Newman’s (Hunter King) emotional distance. However, Nikki and Victor will make a promise to each other. It looks like they’ll form a secret pact about doing whatever it takes to bring the family back together. Let’s hope their mission pays off!

In Vegas, Cane Ashby (Daniel Goddard) will finally end up in that predicament that’s been teased. Y&R spoilers hinted that it might happen a bit earlier, but at least this should bring a satisfying Friday cliffhanger. Cane will be knocked out and snatched after showing up to meet Chance. Of course, the text summoning Cane could easily be from someone besides Chance himself.

Adam claims to not be involved in any of this, but is that really true? His connection to Chance probably isn’t a coincidence. Either Adam’s lying or he may get involved after all. Back in Genoa City, Amanda Sinclair (Mishael Morgan) will make Elena Dawson (Brytni Sarpy) nervous. Elena just won’t trust Amanda, so she’ll worry about Devon getting hurt and sinking back into a pit of despair.

Elena will do everything she can to make sure Amanda stays in line. Unfortunately, Elena isn’t exactly a force to be reckoned with. She’s got a fierce side, but she’s more sweet than feisty. Amanda, on the other hand, is a real firecracker. If Elena makes an enemy out of Amanda, it could spell serious trouble.

Other Young and the Restless spoilers say Jill Abbott (Jess Walton) will blow her top. There’s no word on who will be on the receiving end, but it could be Amanda. Everyone who’s part of the will drama likes to lash out at her. Jill could also leave an outraged voicemail for Chance or rip into someone else instead. The point is Jill will be riled up and ready to let somebody have it!